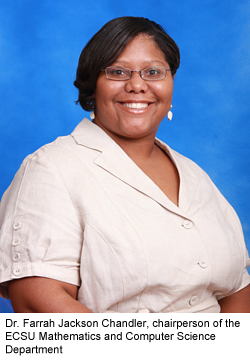 Elizabeth City State University is doing its part to encourage talented undergraduates and professionals to enter the teaching profession in school districts facing shortages of math and science teachers.

Through the Robert Noyce Teacher Scholarship Program, ECSU is preparing future teachers with highly sought skills in the fields of science, technology, engineering and mathematics, or STEM.

Noyce Scholars receive scholarships covering the full cost of their tuition, room and board, and a possible stipend. In exchange for each year they are awarded a scholarship, each scholar must teach for two years in a high-needs elementary, middle or high school once they graduate.

&quotWe hope to keep them in northeastern North Carolina, where there is a real shortage of teachers,&quot said Dr. Farrah Jackson Chandler, chair of ECSU’s Department of Mathematics and Computer Science. &quotFor STEM teachers, the shortage is exacerbated in rural, northeastern North Carolina, where nearly one in three new teachers leaves the profession after only three years on the job. And about 40 percent leave after five years.&quot

Chandler spearheaded ECSU’s successful effort resulting in the National Science Foundation awarding the university more than $672,000 for the five-year Noyce grant program. ECSU was the only Historically Black College and University to receive the money during the 2010-11 grant cycle to begin recruiting students for the program.

Already, ECSU’s program is ahead of schedule, with six students currently selected as Noyce Scholars. The program funds rising juniors and seniors, as well as STEM degree-holders returning to school to earn teaching certifications and licensure.

Four of the six Noyce Scholars are undergraduates, with two majoring in mathematics, one in chemistry and one in biology. All are minoring in secondary education.

The other two scholars already have undergraduate degrees and are returning to earn their teaching certification, a process that Chandler said takes two to three semesters. One, a former stay-at-home mom, has a math degree, while the other is an ECSU computer science graduate seeking a career change to become a teacher.

While this is the first full year of funding Noyce Scholars, two are slated to finish in May 2012. Currently, they are doing their student teaching this semester at Perquimans County High School and Pasquotank County High School.

Chandler said both schools are considered high-needs schools as defined by the U.S. Department of Education’s criteria such as family income and the number of student receiving free or reduced-price lunches.Â

While Noyce Scholars can teach at any high-needs school in the United States, Chandler said the need for their expertise is great in the region served by ECSU. She said 20 of the 21 counties in the region are considered high-needs areas, with Dare County being the exception.

&quotI get calls at least three times a semester from school officials in northeastern North Carolina looking for math and science teachers,&quot Chandler said. &quotUnfortunately, in recent years, many individuals have moved away from the teaching profession for various reasons – the salary, they don’t see it as prestigious and opt instead for careers in engineering and medicine. My hope is to show students that they can make an impact on individuals’ lives by teaching, especially in this region.&quot

Many ECSU students, including Noyce Scholars, are from areas in North Carolina where the STEM teacher shortages are most critical, Chandler said. &quotSo if we can recruit those students who have come through those school systems to go back and teach, it will make a big difference in the long run,&quot she said.

The grant also provides for continuing support of Noyce Scholars when they enter the classroom, Chandler said. &quotWe can fund them for materials for the classroom and they can come in the summers and get help on lesson planning,&quot she said.

Money through the grant also allows for the scholars to attend professional conferences while they are at ECSU, as well as when they become teachers, Chandler said. Two Noyce Scholars attended the October 2011 conference of the North Carolina Council of Teachers of Mathematics held in Greensboro.

The Noyce Scholars program dovetails with efforts already in place at ECSU to generate interest in the teaching profession. Most notable, Chandler said, is Dr. Linda Hayden’s CReSIS program, in which rising freshman and sophomore students help teach middle school students in areas of science and scientific research during a two-week summer camp on campus.

The CReSIS program gives underclassmen an idea of what teaching is like, Chandler said, and if they like it, they can consider applying to be a Noyce Scholar during their junior and senior years.

&quotWe think once students try teaching, they will see it really is an exciting career field,&quot she said.

&quotI anticipate that several of our Noyce Scholars will migrate right into our graduate program,&quot Chandler said.