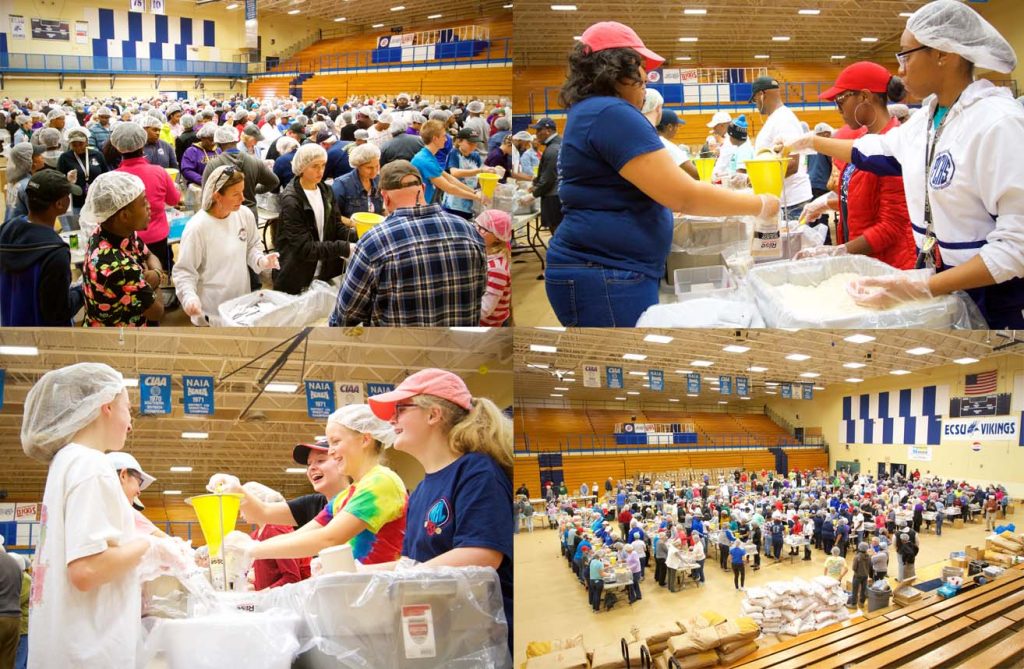 More than 700 volunteers from ECSU and the surrounding community gathered together Sunday, Nov. 19, to package 109,000 meals for the Rise Against Hunger campaign to be distrusted to Haiti and Madagascar, and bag 14,000 pounds of apples for Food Bank of the Albemarle to be distributed to families in Northeast North Carolina.

The gym floor of the R.L. Vaughan Center on the campus of Elizabeth City State University was packed with people. Each one had arrived to package meals to be sent across the globe in an effort to fight hunger. It was the Rise Against Hunger event and in all there were more than 700 people volunteering on Sunday, Nov. 19.

“There were 700 volunteers, and they packed 109,000 meals and bagged 14,000 pounds of apples for Food Bank of the Albemarle,” said Russ Haddad, Special Assistant to the Chancellor.

Last year ECSU hosted the food packaging event, coordinating with two area churches to bring volunteers into the Vaughan Center. This year, however, ECSU took the lead and not only hosted the event, but also sponsored it.

Haddad said the goal this year was to double the amount of volunteers and increase the amount of donations required to help package the food and send it to countries such as Haiti and Madagascar. According to Haddad and Rise Against Hunger coordinator Darron Stover, those goals were met and the event was an ECSU/Elizabeth City community collaboration that stands as an example for the rest of North Carolina.

“When I talk to people about organizing these events, I use you all as an example,” said Stover, a Wake Forest resident. “Other communities have set goals of 100,000 meals but you all are the first to have met that goal.”

Rise Against Hunger, formerly known as Stop Hunger Now, is an organization that provides dry goods to be packed into meals boxed for shipment. Communities and organizations raise funds to pay for the food, and then recruit volunteers to package them.

The event was first introduced to the region by Christ Episcopal Church. Over the years it became a collaborative effort between Christ Episcopal and Mt. Carmel Missionary Baptist Church, before ECSU stepped in to help grow the efforts of the community.

According to Haddad, the initial goal this year was to recruit more than 500 volunteers from ECSU and the surrounding community, and raise enough funds to package more than 100,000 meals. In addition, Food Bank of the Albemarle partnered with the event, bringing bins of North Carolina-grown apples to be bagged and eventually distributed to families in Northeast North Carolina.

Haddad said that initially 660 volunteers were signed up to package meals and bag apples. However, he said a number of people walked into the event at the last minute, increasing that number and making the entire event a success.

In addition, the established goal was 103,000 meals but was surpassed, totally 109,000 meals. That fact, said Haddad, required that $1,700 be raised to cover the cost of the additional meals. ECSU Chancellor Thomas Conway and university First Lady Mychele Conway agreed to donate $1,000 to cover the deficit, challenging community members to raise the remaining $700.

Chancellor Conway also said he is declaring Rise Against Hunger a signature event for ECSU. As long as there is hunger in the world, he said, ECSU will be here to help fight it.

“So if you didn’t get a chance to volunteer this year,” he said, “join us next year.” 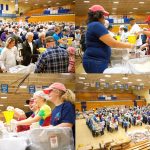