0
294 Views
Warning: json_decode() expects parameter 1 to be string, object given in /srv/users/serverpilot/apps/ecsunewsroom/public/wp-content/plugins/posts-social-shares-count/classes/share.count.php on line 66
0
Shares 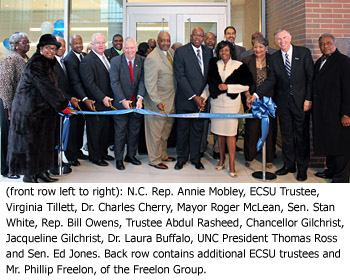 On December 12, over 300 guests gathered on the southeast section of Elizabeth City State University for the grand opening of the Willie and Jacqueline Gilchrist Education and Psychology Complex.

Program speakers included UNC President Thomas Ross, representatives from the U.S. and the NC. House of Representatives and Senate, Mayor Roger McLean, ECSU Trustees, Phillip Freelon, (architect) from the Freelon Group, family members of the Gilchrists’ and more. Mrs. Jacqueline Gilchrist said she was honored by the decision for the building to bear her name and her husband’s. Chancellor Gilchrist thanked everyone for attending and the many people who continue to contribute to the university but could not attend the ceremony.

Two planned gifts to the Willie and Jacqueline Gilchrist Scholarship Fund were announced at the brief ceremony-the couple’s two sons, daughters-in-law, and their daughter and son-in-law, who gave a $75,000 donation. Next, was a $30,000 donation from Mr. and Mrs. Leonard (Ann) Carmichael, both alumni of ECSU.

Chancellor Gilchrist said he is encouraged by the technological advances available in this new building.

&quotStudents don’t learn the way we did years ago so the teachers we are training must prepare for the challenges and bright minds waiting for them in today’s classrooms. Teachers coming out of ECSU need to be equipped, they must be familiar with the use of smart boards, and the other new tools associated with instructional technology,&quot Gilchrist said. &quotThis building is equipped with devices that allow for face-to-face interaction with classrooms at other locations, outside North Carolina or outside this country.&quot

This new complex also includes a 252-square-foot, Global Education Center which enables the university to teach classes or host seminars from the ECSU campus and transmit video any adequately prepared site in the world.

&quotWe have a diverse faculty and an increasingly diverse student body who take pride in international discussions beyond those scheduled once a year during International Week.&ampnbsp This Global Education Center is an essential tool for increased communication. It’s also a commitment to the goals and objectives we set for students participating in our Global Leadership Academy.&quot

All exterior doors and office suite entrance doors will be operated by a key card system. Administrators were proud to open the building to visitors for tours Monday.