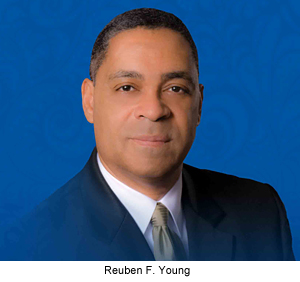 Elizabeth City State University welcomes Reuben F. Young Secretary of the N.C. Department of Public Safety as the speaker for the university’s 154th Commencement Ceremony. The ceremony will be held at 9 a.m. on May 52012 in Roebuck Stadium at ECSU.Young serves as the sole representative on the Governor’s Cabinet for the state’s law enforcement corrections juvenile justice and emergency management community. He also is in charge of the state’s homeland security coordination. The Department of Public Safety is the largest state agency with 27000 employees. As secretary for the Department of Crime Control and Public Safety Young also serves as a member of the Governor’s Crime Commission. In addition he is currently serving as chair of the State Emergency Response Commission.In January 2009 Gov. Bev Perdue appointed Young to serve as the eleventh secretary of the N.C. Department of Crime Control and Public Safety. Prior to his appointment as secretary Young served as chief legal counsel for Governor Michael Easley. His past posts included government service in Texas and in North Carolina.From 1985-1995 Young lived in Austin Texas. He worked in the Elections Division of the Secretary of State’s Office from 1985-1987 before entering private law practice. From 1988-1992 he worked as an assistant district attorney for Travis County (Texas) before returning to private practice in 1992. In 1994 Young served as Assistant Attorney General for the state of Texas.He returned to North Carolina in 1995 and worked as both Associate and Assistant Attorney General in the N.C. Department of Justice representing the Department of Crime Control and Public Safety. He remained in that department until 2001 when Governor Easley appointed Young as deputy legal counsel. He served as the governor’s chief legal counsel from 2003 until his appointment as secretary of Public Safety.Although a native of Chattanooga Tennessee he graduated from Sanderson High School in Raleigh North Carolina. Young earned his Bachelor of Arts from Howard University. He earned his Juris Doctorate from North Carolina Central University School of Law in 1985.Young and his wife Pamela have two sons Brandon and Avery. 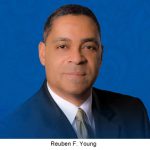