0
342 Views
Warning: json_decode() expects parameter 1 to be string, object given in /srv/users/serverpilot/apps/ecsunewsroom/public/wp-content/plugins/posts-social-shares-count/classes/share.count.php on line 66
0
Shares 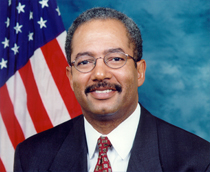 Elizabeth City State University will hold its 150th Commencement at 9 a.m. on May 8 at Roebuck Stadium. ECSU welcomes U.S. Rep. Chaka Fattah, from the Second District of Pennsylvania as the speaker.

&ampnbspFattah is a life-long resident of Philadelphia, Congressman Fattah attended city public schools, the Community College of Philadelphia, the University of Pennsylvania Wharton School, and the University of Pennsylvania Fels School of State and Local Government where he earned a Master’s Degree in Government Administration. He also completed the Senior Executive Program for State Officials at Harvard University’s John F. Kennedy School of Government.

Fattah is an experienced lawmaker serving his eighth term in the U.S. House of Representatives. He represents the Second Congressional District of Pennsylvania, which includes parts of Philadelphia and Cheltenham Township. A member of the powerful Appropriations Committee, Congressman Fattah holds a seat on the following subcommittees: Commerce, Justice, Science, and Related Agencies Financial Services and Energy and Water Development.

Appointed by House Speaker Nancy Pelosi to Chair the Congressional Urban Caucus, Fattah will lead its members to craft an urban agenda on issues such as public safety, employment, education, transportation, housing, health and strengthening the nation’s infrastructure. In addition, the caucus will seek and support legislation that advances the development of strong economically vibrant metropolitan areas.

Congressman Fattah is married to Renee Chenault-Fattah, and has a family of four children.