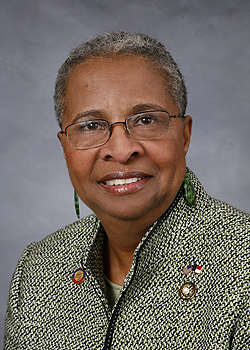 Elizabeth City State University welcomes Rep. Annie Mobley as the speaker for the December 12, 2009 commencement which begins at 10 a.m. in the Robert L. Vaughan Center.

Prior to her election to serve in the NCGS House of Representatives, she was enjoying retirement from the position of Chief Court Counselor in the Administrative Office of the Courts, 6B Judicial District, NC. During her distinguished career, Representative Mobley also taught school in Bertie County (NC). Early in her career, she served as probation officer for the Supreme Bench of Baltimore (MD) and as clerk for the Baltimore City Housing Authority.

In the NC House of Representatives, Representative Mobley serves on several committees, including Aging, Agriculture, Appropriations, Appropriations Subcommittee on Justice and Public Safety, Judiciary I, Juvenile Justice (Chairman) and State Government/State Personnel (Vice-Chairman). She was recently appointed by the House Speaker to serve on the North Carolina State Council for Interstate Juvenile Supervision, effective from September 1, 2009 until August 31, 2012. Her other interests include service on the following boards and committees: Exodus for Youth, Incorporated Hertford County Smart Start Initiative National Conference of State Legislators Law and Criminal Justice Committee R. L. Vann Community Resource Center, Incorporated and the Roanoke-Chowan Community Health Center Board. She serves as Director for the Southern States representing Women in Government and serves on the Board of Directors.

For her untiring commitment and stellar community service, Representative Mobley has received numerous awards and recognitions: BMB Home Shelter, Incorporated Service Award, Hertford County Woman of the Century, National Association for Equal Opportunity in Higher Education (NAFEO) Presidential Citation, Recognition Award for Outstanding Accomplishments and Service to the Community (presented by the Elizabeth City Chapter of Links, Incorporated) and the Order of Long Leaf Pine Governor’s Award. In addition to service in these organizations, Representative Mobley is an active Golden Life member of the Delta Sigma Theta Sorority, Incorporated serving as the Charter President of Ahoskie Alumnae Chapter in addition to numerous other offices in the chapter. She is also a life member the Elizabeth City State University National Alumni Association, Incorporated.