0
621 Views
Warning: json_decode() expects parameter 1 to be string, object given in /srv/users/serverpilot/apps/ecsunewsroom/public/wp-content/plugins/posts-social-shares-count/classes/share.count.php on line 66
0
Shares 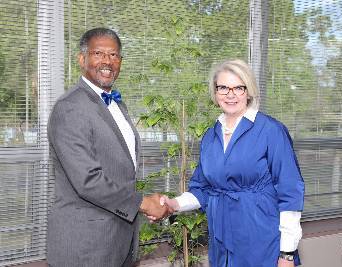 From the moment University of North Carolina President Margaret Spellings walked through the doors of Elizabeth City State University on Tuesday, it was clear that the newly appointed system chief was a welcome guest.

Since President Spellings took office earlier this year, she has been making the rounds across North Carolina, touring the state’s UNC constituent campuses. The enthusiasm for Spellings’ visit was clear as she was greeted by staff, faculty and students.

After meeting with ECSU Chancellor Thomas Conway, President Spellings was greeted by staff, students and faculty in the Marion Thorpe Administration Building and posed for photographs with each group. Student leaders commented on how much they enjoyed their time with her and were impressed with her desire to listen to them and answer their questions.

Her day-long tour continued with a visit to Museum of the Albemarle where the ECSU 125th anniversary exhibit will open in May. Greeted by the museum’s director, Bill McCrea, and curator, Wanda Lassiter, President Spellings was given a sneak peek of the exhibit before attending a luncheon with the ECSU Board of Trustees. During the luncheon, the president discussed several issues with the board, including tuition, minimum admissions requirements, and the significance of HBCUs to the mission of higher education.

The discussion also focused on the importance of ECSU for students seeking an opportunity to advance their lives through the university experience. Trustee Harold Barnes, a successful Raleigh businessman, recounted his experience as the first member of his family to graduate from a university. He said that if it were not for his education at ECSU, he would not be where he is today.

After the luncheon, President Spellings, accompanied by Chancellor Conway and his staff, toured downtown Elizabeth City. She was shown key points of interest near the waterfront including Arts of the Albemarle and Port Discover.

Moving back to ECSU, the president received a tour of the campus. The tour highlighted points of interest across the campus before ending at the Gilchrist Education and Psychology Complex where she watched a presentation on initiatives for ECSU’s education program.

Next, President Spellings visited the Pharmacy Complex where she met with students and faculty and learned about unique cancer research taking place at ECSU. The presentation capped off an impressive display of academic research unique to ECSU in the UNC system.

A community reception at the K.E. White Center featured a number of community members and elected officials eager to greet the president. An informal gathering, President Spellings had the opportunity to speak with a number of ECSU alumni, former faculty members and supporters before moving on to the Elizabeth City Municipal Airport.

At the airport, President Spellings was greeted by members of the aviation department where she was shown the university’s onsite lab as well as given a tour of the two airplanes used to train student-pilots. Her day ended with a session with the local newspaper in the airport conference room.

The day-long tour was the result of several months of planning on the part of ECSU’s administrative staff. President Spellings’ staff commented that this was one of the most enjoyable tours she has experienced throughout her trek across the state.