0
433 Views
Warning: json_decode() expects parameter 1 to be string, object given in /srv/users/serverpilot/apps/ecsunewsroom/public/wp-content/plugins/posts-social-shares-count/classes/share.count.php on line 66
0
Shares 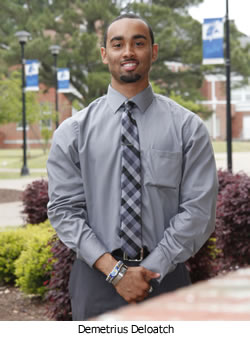 Demetrius Deloatch realized the best way to maximize the education he acquired from his political science courses at Elizabeth City State University was to complete an internship in North Carolina’s General Assembly. The Legislative Internship Program, sponsored by the General Assembly and the School of Public and International Affairs at North Carolina State University, helps up to 12 students from the state’s four-year universities serve as staff assistants to the members of the General Assembly. During their semester as interns, those students also enroll in upper division courses at N.C. State University and work 32 hours per week. After completing the application and a rigorous interview, Deloatch was selected for the Legislative Internship Program. He interned in the office of Senator Gladys Robinson of Guildford County from early January to early May of this year. Deloatch says it was a great way to complete his last year as an ECSU student. &quotServing in the North Carolina General Assembly has undoubtedly been one of my greatest experiences,&quot Deloatch said. He went on to describe some of the major topics covered during the legislative sessions: gerrymandering/redistricting, education, health care, hunting, and property. Deloatch said the entire process has given him a new outlook on the challenge of serving as a state representative or a state senator. &quotThey have to consider who will negatively be impacted by proposed bills. Will legislation benefit people of a certain political party while placing the other at a great disadvantage?&quot Those are the kinds of issues Deloatch said legislators routinely grapple with. Outcomes could mean the difference between a legislator being reelected or ousted. Deloatch’s duties included attending meetings, documenting discussions, printing off legislation pieces, answering phones and more. He completed the program with a 3.75 grade point average and returned to ECSU to graduate last May. He’s grateful for ECSU faculty and staff who encouraged him to complete the Legislative Internship Program and hopes other students will consider applying. He enjoyed the experience so much that he is completing a second internship assisting Rep. Edward Haynes of Forsyth County until August. Thereafter, Deloatch will begin a master’s degree program in public affairs at University of North Carolina at Greensboro.