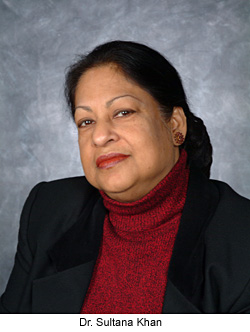 The Elizabeth City State University Board of Trustees recently (September 11) voted to name the ECSU Planetarium in honor of Dr. Sultana Khan, the facility’s director. Khan, a professor in ECSU’s Chemistry, Geology and Physics Department, has been employed by the university 33 years. She took on the additional role of director of the planetarium in 1990. In 2006, the University of North Carolina Board of Governors named her as one of 16 recipients of the Award for Excellence in Teaching. The award was established in 1994 to underscore the importance of teaching and to encourage, identify, recognize, reward and support good teaching within the university. The awards are presented annually to a member of the faculty of each of the constituent institutions of the UNC system. Khan’s research focus is metal-insulator transitions and solar energy research with the National Renewable Energy Laboratory. Khan’s teaching interests include electricity and magnetism, astronomy, optics, thermodynamics, modern physics, mechanics and mathematical methods of physics. Khan said it is an immense honor for the planetarium to bear her name. &quotI am honored and fortunate to be acknowledged for the work I love to do. It is wonderful to know that this legacy will be here for a long time.&quot Khan has seen the planetarium develop from a concept on the drawing board to a vibrant facility that each year welcomes thousands of visitors, including school groups and area residents. &quotThe planetarium is important reflection of ECSU’s commitment to outreach and community engagement and academic excellence,&quot Khan said. &quotI’m very thankful to our Board of Trustees for recognizing our achievements. Faculty, staff, administration, students and alumni have contributed to the planetarium’s success.&quot The planetarium opened on Jan. 23, 1990, with a visit from then-Gov. James G. Martin. At that time, the planetarium consisted of a 30-foot dome with a uni-directional classroom seating 54 and a SPITZ 512 star projector. The planetarium has grown and currently is equipped with 60 uniquely designed planetarium chairs, more than 40 automated mechanical projectors and a collection of advanced audio visual equipment, three screens of full-motion video from DVD, laser disc or VHS and a professional theater-quality sound system. &quotI remember working during weekends, holidays and many weeknights, often working until midnight to put shows together,&quot Khan recalled. The planetarium offers a range of programs free to the public, including seasonal shows. Although Khan plans to retire next year, she said she will remain involved with the planetarium. The dedication ceremony for the facility will be held at a later date. For information on the planetarium, go to www.ecsu.edu/planetarium