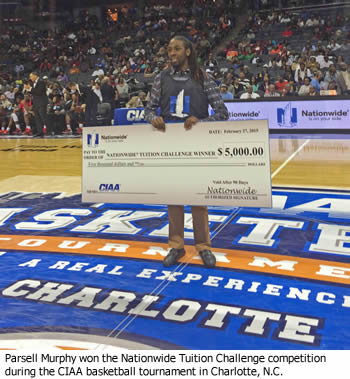 Parsell Murphy Jr., a sophomore from Roseboro, North Carolina, recently won a $5,000 scholarship from Nationwide during the Central Intercollegiate Athletic Association’s CIAA- Nationwide Tuition Challenge competition. Murphy applied online for the contest which provides scholarship money to assist competitors from CIAA universities with tuition fees. During the February 27 evening game, two contestants competed simultaneously. Starting on their respective foul lines, contestants try to score as many points as possible by standing at designated shooting spots. When the shot clock expired and the music stopped, the winner who tallied the most points claimed the prize. Murphy, a business administration major at ECSU, said he hadn’t played basketball on a regular basis since high school. He was delighted to earn the scholarship money from this contest. &quotThe whole time, I still was hearing my former coach saying ‘Always play fast, but never in a hurry.’ In the end, I succeeded by my determination, my coach’s advice, and by the grace of God. Because through God all things are possible, I am my HBCU, Viking Pride!&quot