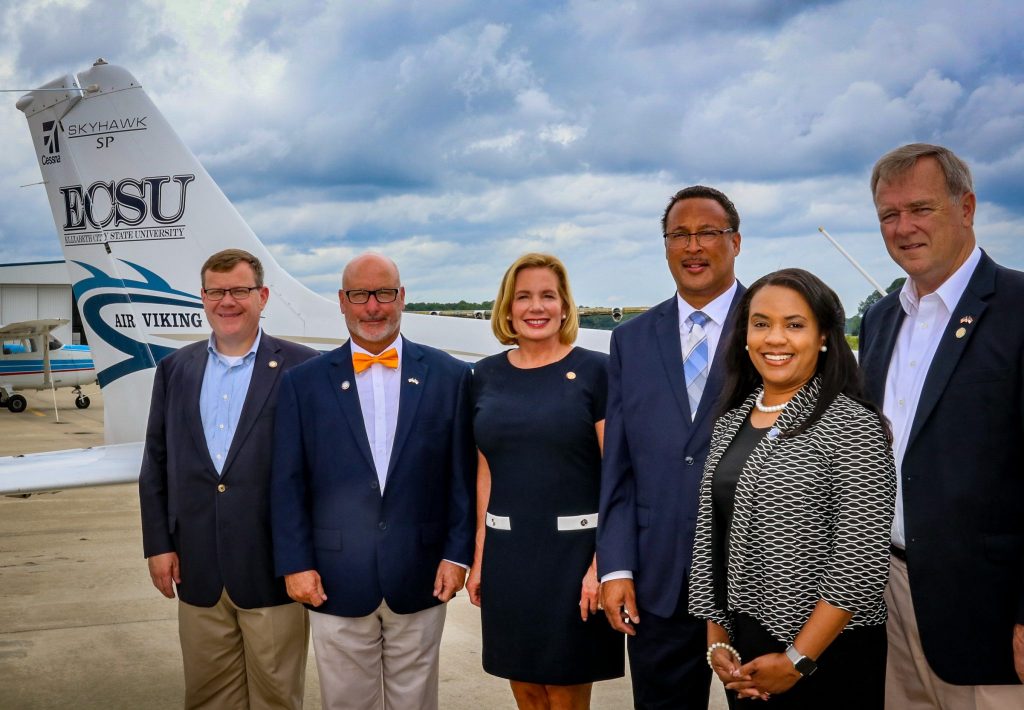 North Carolina Speaker of the House Tim Moore, far left, came to the ECSU campus with three other elected state officials to get a sneak peek at the new STEM Complex and tour the campus. On the tour, Speaker Moore was joined by, left to right, Rep. Bobby Hanig, Rep. Holly Grange, Rep. Howard Hunter, ECSU Chancellor Karrie Dixon, and Rep. Ed Goodwin.

Elizabeth City State University’s profile is growing across North Carolina, and the aviation program is fast becoming a major draw. North Carolina Speaker of the House Tim Moore and four other state elected officials are among those who discovered the excitement surrounding one of ECSU’s signature programs Monday, Aug. 5.

The representatives and their teams met at the new STEM Complex for a sneak peek at the future of Science, Technology, Engineering, and Mathematics (STEM) education on campus. The official grand opening of the STEM Complex is scheduled for Aug. 12 at 4 p.m.

The tour included a stop in the drone lab, the air traffic control lab, and the flight simulator lab. ECSU Chancellor Karrie Dixon highlighted the importance of the aviation program and the significance it has on the future of aviation across the country.

“It is innovative,” Chancellor Dixon said about the aviation program. “It is definitely going to help us as far as the future of demands for more pilots across the country.”

As the nation’s current inventory of commercial pilots grows towards retirement age, the Federal Aviation Administration has said there is a great need for new pilots across the country. ECSU has the only four-year aviation program in the state, and trains pilots for a future in commercial aviation.

Chancellor Dixon also spoke to the state representatives about the increase of enrollment thanks in part to the N.C. Promise Tuition Plan, and the growing need for infrastructure improvement on campus. She expressed her gratitude to the state’s elected officials for their continued support of ECSU through the N.C. Promise program.

“We grew 20 percent this year and we expect to grow in the double digits in fall 2019,” said Chancellor Dixon. “We appreciate the support of the establishment of the N.C. Promise program on this campus.”

Chancellor Dixon said that as a part of ECSU’s growth, the signature aviation program is taking off, bringing a great deal of notoriety to the university. In addition, she noted that biology is one of the most sought after majors at ECSU, and while the future at the university is looking up thanks to the support of state legislators, there is more to be done to ensure sustainable growth.

“As part of our growth, we are focused on making sure our infrastructure can support the growth,” said Chancellor Dixon. “And so some of the things you see today, you are going to recognize that we still have some challenges and we still have some needs.”

The tour took the legislators across the ECSU campus, highlighting a variety of locations that have undergone significant change, and areas that the university hopes will feature major change in the future. One such area, highlighted by ECSU Chief Operating Officer Alyn Goodson, is a future state-of-the-art library.

Mr. Goodson pointed to the current location of two former residence halls, noting that the sight is the planned location of the future library. Plans for the library were shared with legislators and Mr. Goodson pointed out that it will not only be a significant presence for students, but for members of the surrounding community as well.

The tour ended with an up close look at the ECSU plane fleet. The fleet includes 10 fixed-wing aircraft and one gyrocopter. The gyrocopter is part of ECSU’s work with Kenyan wildlife officers to end poaching in the African nation’s wildlife preserves. 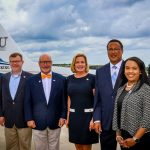