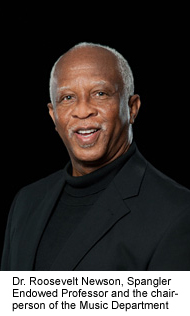 Join Dr. Roosevelt Newson, ECSU’s first Spangler Endowed Professor and the chairperson of the Music Department, for the initial segments of the &quotAmericana Lecture Series,&quot on March 8 and March 29 in the auditorium of the Mickey L. Burnim Fine Arts Center. The March 8 presentation begins at 7 p.m.The subject matter for all of the presentations will center around American Music and the&ampnbsprole of African-Americans in creating the country’s&ampnbspunique&ampnbspmusical language.&ampnbsp&ampnbspWhile the first two presentations will take place in March, future presentations will be scheduled over a broader range of time.&ampnbsp His first&ampnbsppresentation is&ampnbspa lecture, &quotThe Invention of the Negro and the Evolution of His Music,&quot but the second presentation, &quotThe Era of Ragtime,&quot is a lecture-recital featuring student and faculty performers. The&ampnbspseries will continue throughout his appointment&ampnbspas the Spangler Endowed Professor.&ampnbsp &quotNext year, I am likely to present&ampnbspone standard lecture and a second presentation which will be&ampnbspa multi-media presentation.&ampnbspI’m looking forward to presenting this series for the community and of course ECSU students, staff and faculty,&quot Newson said.Dr. Newson has an impressive resume documenting his accomplishments as a concert pianist and academician.&ampnbsp Featured as a soloist with the Charlotte Symphony, Baltimore Symphony Orchestra, Cleveland Philharmonic, and the Northeastern Pennsylvania Philharmonic, Newson has also presented solo recitals at Diligentia Hall in The Hague, The Mozarteum in Salzburg, Wigmore Hall in London, Town Hall in New York City, as well as The Kennedy Center and the National Gallery of Art, both in Washington D.C.&ampnbsp For a brief period, Newson was listed on the artist roster of the Perotta Management in New York City.&ampnbsp The Louisiana-born pianist graduated from Southern University in Baton Rouge, La. and continued his formal studies at The Peabody Conservatory of Music in Baltimore and The Juilliard School in New York City.&ampnbsp Newson’s primary teachers include Walter Hautzig, Leon Fleisher, and Martin Canin.&ampnbsp&ampnbsp&ampnbsp With a second career in Higher Education, Dr. Newson has served as Dean at three institutions and as Provost at two other institutions. Having served two terms on the Board of Directors for CCAS (Council of Colleges of Arts &ampamp Sciences), he was subsequently elected as President of CCAS.&ampnbsp A former ACE (American Council on Education) Fellow, &ampnbspNewson is currently serving a three-year term on the Board of Directors for the ACE Council of Fellows.For more information on this series, contact the ECSU Music Department, 335-3359.