0
232 Views
Warning: json_decode() expects parameter 1 to be string, object given in /srv/users/serverpilot/apps/ecsunewsroom/public/wp-content/plugins/posts-social-shares-count/classes/share.count.php on line 66
0
Shares 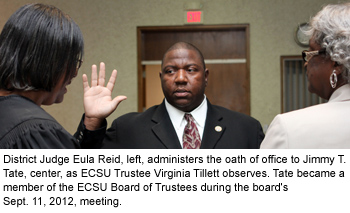 Jimmy T. Tate a North Carolina community college administrator became the newest member of the Elizabeth City State University Board of Trustees on Sept. 11 2012. Tate of Willard N.C. was named to the board by the UNC Board of Governors for a four-year term. He was sworn into office on September 11 during the quarterly meeting of the Board of Trustees. Tate an active public servant currently serves as executive director of strategic initiatives and organizational effectiveness for the president of James Sprunt Community College in Kenansville in Duplin County N.C. Tate is also vice chairman of the Pender County Board of Commissioners. Tate is a graduate of the University of North Carolina at Wilmington where he earned his bachelor’s and master’s degrees history. In addition he continued his studies at Shaw University’s Divinity School Fayetteville State University Iowa State University and North Carolina State University. He also completed the Community College Administrator’s Leadership Certification Program in Chapel Hill N.C. He has received numerous advanced studies certificates continuing his professional development. A firm believer in education and higher education Tate has taught high school and college students. He has served as an adjunct history professor at Campbell University James Sprunt Community College Coastal Carolina Community College and Shaw University. He has taught humanities and history courses in North Carolina history U.S. history cultural studies Southern culture Western civilization and American government. In addition to his current position at James Sprunt Community College he has served as associate vice president for college advancement and institutional effectiveness. H is active in church and community activities. As a member of the Pender County Board of Commissioners (2007 -) he has served as vice chairman and twice as chairman. He also was appointed by Gov. Beverly E. Perdue to serve on the North Carolina State Youth Advisory Council. In addition he was invited by Congressman Mike McIntyre to serve on his Southeastern North Carolina Educational Advisory Committee. He has also served on the National Association of Counties Steering Committee an organization representing elected officials across the nation. He also works tirelessly in ministry. ### 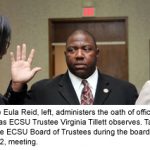