0
399 Views
Warning: json_decode() expects parameter 1 to be string, object given in /srv/users/serverpilot/apps/ecsunewsroom/public/wp-content/plugins/posts-social-shares-count/classes/share.count.php on line 66
0
Shares 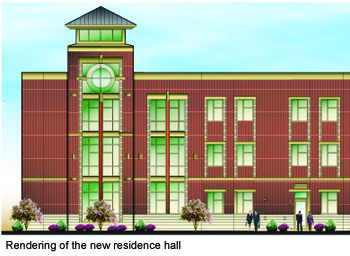 If you have visited ECSU in the last four years, you’ve no doubt seen the signs that beg visitors to &quotPardon our Progress&quot each time crews begin construction of a new building.

It’s time you grant them an extension on that pardon.

Construction of a new residence hall began in mid May. Administrators say it will likely be completed by August 2012. The new, $13.5 million structure will stand behind Bias Hall on the northeast quadrant of the campus.&ampnbsp It will be located in the heart of campus near The Promenade, where many student activities are held. The residence hall will also stand a short distance from Johnson Hall, Lane Hall and Moore Hall where numerous classes are taught.

The new residence hall will include single– and double–occupancy rooms.&ampnbsp While the design may appear traditional by modern residence hall standards, it will contain some &quotgreen,&quot energy–saving features. Plans call for using roofing materials that will reduce the amount of energy needed to cool the building during hot summers. Reduced–flow shower heads and sink faucets and low– volume toilets will be used to reduce the amount of water used in the new building.

Constructed of steel and concrete, the new structure is expected to have a longer lifespan than some recent structures made of wood.&ampnbsp A parking lot will eventually be created after the current infirmary is torn down. A computer lab is planned for the second floor of the facility to meet the rising demand for public computers.

Administrators say the new residence hall will reduce the need to house students off campus. During the past three years, students have been housed at Microtel, Quality Inn and local condominiums because of the overflow demand for housing. A spike in applicants sparked an immediate search for housing when the largest freshman class in ECSU history arrived in 2009. Anthony Brown, vice chancellor for the Division of Student Affairs, said the university wants to accommodate the increasing number of students applying for campus housing.

Administrators favor campus housing because that factor contributes to retention and graduation rates among freshmen and sophomores who live on campus. &ampnbspThe new residence hall also will allow Residence Life to offer theme housing plans – sections within the residence hall where students with common interests or study patterns can readily interact. ROTC students may have a block of rooms. Math and science majors may opt for a series of suites so they can collaborate on class projects. Brown said today’s students have new expectations for campus housing and administrators are wise to adhere to their wishes.

&quotEven when local students enroll at ECSU, some prefer to live on campus. Those who had single rooms at home want single rooms here. The number of single units in this building will help us meet the demands of our students,&quot Brown said.

Relieved to share the decision of who will live in the new residence hall, Brown smiled and offered one additional insight.

&quotWe asked current students for their opinions. They decided only upperclassmen will reside in this new residence hall. Freshmen, they said, can live in the other residence halls on campus.&quot