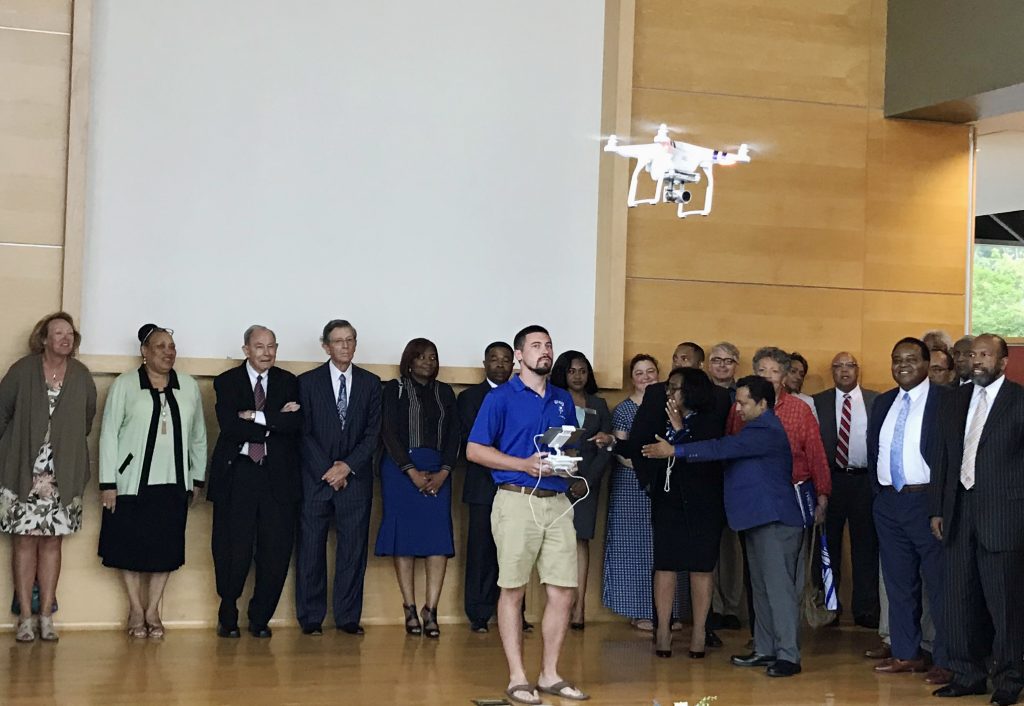 Aviation student William Nelson demonstrates a drone flight for ECSU Board of Trustee members Tuesday, June 12. Nelson took an aerial photo of the board members using the drone camera.

New degree programs, the ongoing beautification of the Elizabeth City State University campus, more enrollment growth: this is the sort of news that raises that Viking spirit so many rally behind. And on Tuesday, June 12, the ECSU Board of Trustees heard all of it, and more.

“It’s a new day,” ECSU’s Interim Chancellor Karrie Dixon told trustees. “We are moving in a new direction and we are all excited about that.”

News of new directions at ECSU is unfolding almost daily. The university’s vice chancellors took turns presenting reports to trustees, bringing that fact to bear during the quarterly meeting.

Vice Chancellor of Academic Affairs, ECSU Provost Vann Newkirk, said two new degree programs are in the planning stage. Both of them, he explained, are in high demand by students, and the workforce.

Newkirk said a degree in homeland security is one of those degree programs that his office has heard about; people inquiring if ECSU would be adding that to its roster of exciting programs.

“There is quite a bit of interest in this homeland security program right now,” he said. “It would give us a unique niche and put us in a new direction.”

The program, he told the trustees, is designed to fit the needs of the Coast Guard and other military branches. Like ECSU’s Interdisciplinary Degree, the homeland security program would be online and allow members of the military, or anyone interested in the degree, to take the program with them no matter where they are.

“We want the programs to be portable,” he said.

Another new program on the table is a degree in sustainability. Newkirk explained that more and more degrees focusing on sustainability are highly desired by students.

“Green majors are the new majors and this is the future of higher education,” he said.

The so-called green majors focus on sustainable energy, for one, and with the recent installment of wind and solar farms in the region, partnerships with outside companies are a possibility, he said.

With both proposed degree programs, Newkirk explained that ECSU would not incur additional costs. The faculty, staff and facilities are in place for both programs.

All new degree programs must go through an approval process. Newkirk estimated that these programs could be offered as soon as fall 2019.

As new programs are being created, new students are becoming more aware of what ECSU has to offer them. Coupled with the NC Promise reduced tuition program, Associate Vice Chancellor for Enrollment Management Althea Riddick said the university is “on goal” with its enrollment numbers.

She told trustees that her department is ramping up its efforts to bring new students to ECSU every day. From following up with students and their families, to increasing marketing outreach with social media and other means, to a 21-county sweep with university recruiters, the efforts are paying off and more and more students are applying, and being accepted to ECSU.

Chancellor Dixon, when addressing the trustees, listed a number of actions being taken or investigated to move the university further into the future. Beautification efforts, for example, are ongoing and the results are being noticed by students, faculty, staff, and visitors.

In addition, Chancellor Dixon said the UNC System Board of Governors is moving forward with funding requests for ECSU and the list of improvements that are being pursued on campus. She said the commitment of the Board of Governors to ECSU, and the action taken by the New Directions working group, in concert with the support and efforts of the Board of Trustees, is putting ECSU in a good position for current and future generations.

“I have faith in the future of this university,” she said. 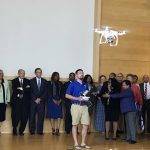