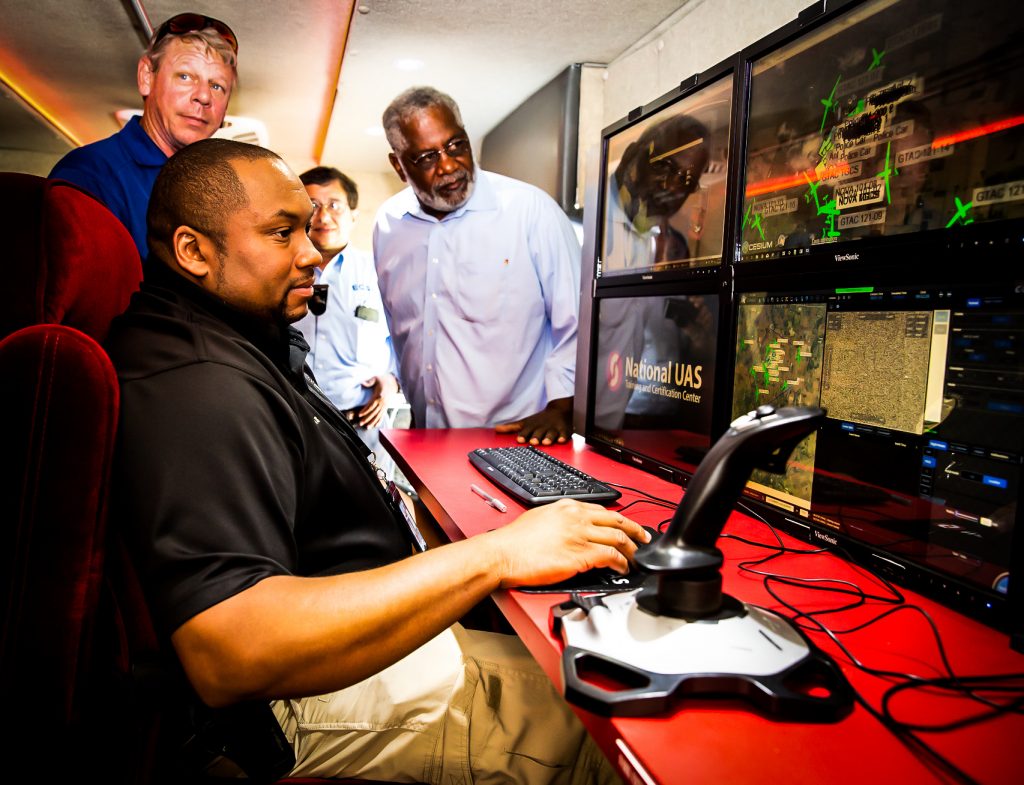 As Elizabeth City police officers chased a criminal suspect into a swamp across from the Albemarle Sentara Hospital, they knew the best way to look for him would be from the sky. That’s when they called Elizabeth City State University’s Unmanned Aerial Vehicle laboratory.

The suspect had run into the swamp. Reports indicated that he had jumped into water up to his neck and spotting him on foot might not be their best option.

The Elizabeth City Police Department’s drone pilot, Lamont Butts, had their drone in the air, as did the North Carolina State Police. But an additional eye in the sky was needed to help penetrate the dense swamp.

ECSU’s drone lab has everything they need so aviation program director and dean of School of Science, Aviation, Health, and Technology, Dr. Kuldeep Rawat, called Aron Bechiom, the university’s drone lab technician. Mr. Bechiom headed over to the police command center, set up shop and proceeded to search for the suspect with a drone.

“I arrived and they gave me a briefing and a picture of the suspect,” said Mr. Bechiom. “Then they had an officer escort me to the site.”

Mr. Bechiom launched the drone and proceeded to search, but in the end, he couldn’t spot the suspect due to the density of the swamp. However, his presence and the fact that ECSU was called to assist local law enforcement, has far reaching implications for the university.

“Any law enforcement or emergency management agency can call us,” says Dr. Rawat.

ECSU has the only four-year aviation program in the state, and just launched a drone degree program this fall. That means the drone lab at the STEM Complex on campus is fully equipped with the latest technology.

ECSU is also working with the City of Elizabeth City to create a drone training ground near the K.E. White Center. That will not only provide ECSU students with a place to train as drone pilots, but also train law enforcement and emergency management professionals.

“We are working on developing certificate programs for law enforcement,” said Dr. Rawat.

And while law enforcement will have their own drone pilots, it’s clear from the recent incident that outside agencies such as ECSU are needed to assist other agencies. Dr. Rawat says that fact has ECSU doing two very significant things at this time: outfitting a mobile drone command vehicle, and looking at forming a damage assessment team.

The latter is significant because ECSU has already been tapped by the North Carolina Department of Transportation to assist them with damage assessment. Dr. Rawat says, had Hurricane Dorian wrecked widespread havoc on the area, the university would have worked in the region to assess damage for the agency.

“At least in this area, I foresee that we will be called to assist in the future,” he said.

As for the mobile command unit, Dr. Rawat says the Ford Transit van has been purchased and university staff, such as Mr. Bechiom, are working on outfitting it.

“We can launch from the back of the van and get the feed and show it on the van,” said Dr. Rawat.

Dr. Rawat says when ECSU is needed again, the university will be ready.

“That’s the reason we are working on the van,” he said.

Dr. Rawat is hopeful the van will be ready for operation by the end of this fall. Once it is ready, ECSU will continue to assist outside agencies.

There are hundreds of career opportunities for ECSU students who graduate with a degree in drone technology. ECSU’s role in assisting communities across Northeastern North Carolina is just one example of what is possible for these students and their futures.

With the drone program in its infancy, the sky’s the limit. 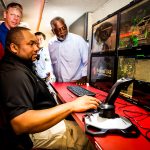