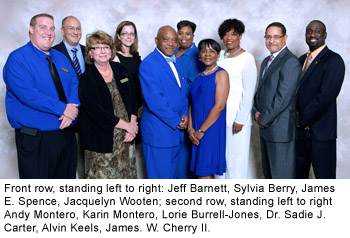 Nine people and two businesses were recognized by the National Alumni Association of Elizabeth City State University at its 36th annual awards banquet held Sept. 7, 2012. The awards recognized significant contributions to the university in several categories. For most of the awards, nominees must be alumni of the university. The Alumni Affairs Award winner was Jacquelyn Wooten, a 1980 graduate. The Community Services Award winner was Lorie Burrell-Jones, a 1991graduate. The Business/Profession Award winners were James Cherry II, a 1996 graduate, and Alvin Keels Sr., a 1976 graduate. The Education Award winners were Sadie Carter, a 1972 graduate, and Livingstone College President Dr. Jimmy R. Jenkins Sr., a 1965 graduate and former chancellor of ECSU, and his wife, Dr. Faleese Moore Jenkins, a 1966 graduate and former assistant professor of education. James E. Spence received the Viking Spirit Award. The recipient may be an alumnus/alumna or ECSU administrator, faculty or staff member who is an untiring and dedicated supporter of the university. Dr. Ali Khan, provost and vice chancellor of Academic Affairs, received the Viking Image Award. The recipient of this award must be a non-alumnus/alumna who is an untiring and dedicated supporter of the university in spirit, deeds and goods. In recognition of its outreach to the University’s athletic teams, parents, members of the Board of Trustees, directors of The ECSU Foundation, alumni, and countless others, the ECSU National Alumni Association, Incorporated named Fairfield Inn &amp Suites of Elizabeth City as its Hotel of Choice and the recipient of the Hospitality Award for 2012. Jeff Barnett, Sylvia Berry accepted the award for the hotel. In recognition of its outreach to Elizabeth City State University and its constituencies ECSU alumni, the ECSU National Alumni Association, Incorporated recognized Montero’s as its Restaurant of Choice for 2012, the second recipient of the Hospitality Award. Barbara Sutton, director of alumni relations was most appreciative of alumni and their family members for participating in this event and the success of the 36th NAA awards banquet.Photo appears courtesy of Clyndell Godfrey.