0
223 Views
Warning: json_decode() expects parameter 1 to be string, object given in /srv/users/serverpilot/apps/ecsunewsroom/public/wp-content/plugins/posts-social-shares-count/classes/share.count.php on line 66
0
Shares

Elizabeth City State University received the first of two installments of scholarship awards from the North Carolina Legislative Black Caucus (NCLBC) Foundation on August 22 2012. State Rep. Alma Adams chairperson of the caucus foundation and state Sen. Edward Jones presented the check to ECSU administrators staff and members of the ECSU Board of Trustees and The ECSU Foundation.

In June the NCLBC Foundation held its 26th annual fundraiser in Durham to raise money for need-based scholarships it awards each year to students attending the 10 Historically Black Colleges and Universities in North Carolina. This year the foundation proudly is contributing $100000 to student scholarships.

Money collected from this year’s event will be awarded in honor of Sen. Jones for his dedication and service in the Senate and his longtime support of the NCLBC. Sen. Jones a retired state trooper has served in the Senate since January 2007. His district includes the counties of Bertie Chowan Gates Perquimans Northampton Hertford and Halifax.

Rep. Adams who has represented Guilford County since 1994 earned her undergraduate and master’s degrees from North Carolina A&ampT State University a Historically Black College in Greensboro before going on to earn a doctorate. She is an art professor and director of the art gallery at Bennett College a Historically Black College in Greensboro. She remains optimistic about educational opportunities for college students today.

&quotThe foundation’s goal is to ease the financial burden for students and to help reduce their debt while making college affordable for all students. Any student who wishes to attain a higher education should have that opportunity&quot Rep. Adams said.

&quotWe are very proud of Sen. Jones and the commitment he has made to improve the quality of life for all citizens of North Carolina especially those in his district in northeastern North Carolina.&quot

ECSU Chancellor Willie J. Gilchrist said he greatly appreciates the contributions by the NCLBC Foundation. &quotThis contribution will help our students reach their goals&quot he said. 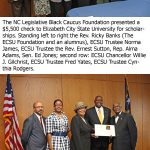