Music Educators Are All About Jazz at Arts of the Albemarle

0
790 Views
Warning: json_decode() expects parameter 1 to be string, object given in /srv/users/serverpilot/apps/ecsunewsroom/public/wp-content/plugins/posts-social-shares-count/classes/share.count.php on line 66
0
Shares

Ever since Arts of the Albemarle’s Third Thursday Jazz Series launched in 2016 the region has been flocking to the downtown Elizabeth City art center to hear the classic American music. Performers have ranged from regional musicians to Elizabeth City State University alumni and now two of its professors.

Music teachers from area schools including ECSU will perform together this week (Thursday April 20) for the Third Thursday Jazz Series. Music professors Douglas Jackson trumpet and Ellard Forester drums will join the region’s public school music directors for the free evening of jazz.

Jackson has been a longtime collaborator with Arts of the Albemarle and he is one of the organizers of the popular downtown event.

Jackson says the ensemble of educators will perform jazz standards fusion and pop. Selections will include the 1939 jazz standard &quotIn a Mellow Tone&quot composed by Duke Ellington &quotSugar&quot composed by jazz saxophonist Stanley Turrentine. Other songs in the lineup include &quotBlue Monk&quot by Thelonius Monk &quotCool Duck Time&quot by Eddie Harris and &quotFeel Like Makin Love&quot by Eugene McDaniels.

The concert is free and open to the public. It happens at Arts of the Albemarle located at 516 E. Main St. in downtown Elizabeth City. The show starts at 5:30 p.m. and runs until 7 p.m. Thursday April 20. 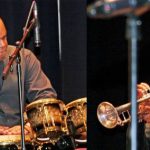 Music Educators Are All About Jazz at Arts of the Albemarle