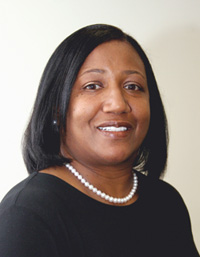 Elizabeth City State University announces Mrs. Cynthia S. Rodgers, vice president of Solid Foundation Facilities Inc. in Bertie County, as the newest addition to the university’s Board of Trustees. Rodgers is a 1980 graduate of ECSU and a governor-appointed member who will serve on the ECSU Board of Trustees until 2013. On June 9, Judge J. Carlton &quotJ.C.&quot&ampnbsp Cole swore Rodgers into office during the board’s quarterly meeting. Rodgers is married to Mr. R. Vernelle Rodgers, and she is the mother of one adult daughter.

Membership of the Board of Trustees includes 13 people, eight elected by the Board of Governors and four appointed by North Carolina’s governor. One student from the university’s Student Government Association serves as an ex officio member.