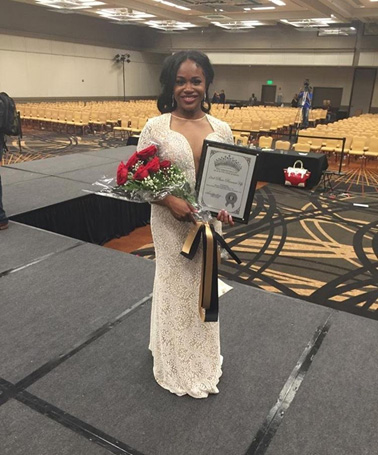 Brittney Lamb’s rise to Viking royalty has a purpose. The Elizabeth City State University junior and Elizabeth City native is Miss ECSU, and she says it’s all about getting involved in campus life, and making a difference.

And it’s that attitude that has also helped propel the 19-year-old biology major to land second runner-up in the National Black Alumni Hall of Fame 2016 Competition of Black Queens.

“I really wanted to get involved on campus and impact students at once,” says Lamb of her decision to become Miss ECSU. “And this was a great way to impact a lot of people.”

Lamb says the Competition of Black Queens held in Atlanta is something Miss ECSU hasn’t done in several years. She says she saw the competition as an opportunity to return her beloved school to the national spotlight and let people know that ECSU is something to be proud of.

The competition consisted of an oratorical presentation, a talent, and an evening gown competition. Lamb says once she made it into the top 10, she presented her talent to the panel of judges. For her talent, Lamb performed a monologue on the “Legacy of Black Women.”

She says making it to the top 10 of this competition allows schools and the contestants some serious bragging rights, so when she learned she would move on to the top five, she was thrilled.

In the top five portion of the competition, aside from evening gowns, the contestants were asked to demonstrate their oratory skills, and answer a series of questions. The oratory was based upon a theme: HBCUs are the root of the black community. Lamb gave her speech as though she was an attorney defending HBCUs, explaining why they are still relevant to the black community.

That performance, her talent, her evening gown and question and answer segment all amounted to taking second runner-up.

“It is a blessing to represent our university on a national scale,” she said.

For Lamb, ECSU is almost in her DNA. She not only grew up near the campus, but also amidst a score of family members who count themselves as alums.

Her mother graduated from the university, so did a number of relatives, and her father, Carlton Lamb, retired last year from the ITC department.

Aside from a family legacy at ECSU, Lamb says the university provides an opportunity for her and the rest of the student population to grow.

“We understand that it is important to grow students into great citizens,” she says.

ECSU, she says, is a school that “helps you prepare for life after college.” And that fact is empowering. Lamb says she would like to see her fellow students turn Viking Pride into Viking Power.

“And understand how much we can accomplish.”