0
310 Views
Warning: json_decode() expects parameter 1 to be string, object given in /srv/users/serverpilot/apps/ecsunewsroom/public/wp-content/plugins/posts-social-shares-count/classes/share.count.php on line 66
0
Shares 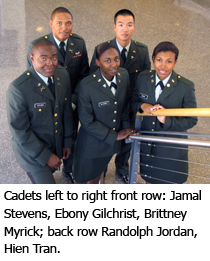 The Department of Military Science at Elizabeth City State University will commission five cadets as second lieutenant in the U. S. Army at 11 a.m. on May 7 on at the Ridley Student Center. The cadets will also repeat their oaths during the May 8 Commencement at Roebuck Stadium with ECSU’s other graduates. In the event of rain, the ceremony will be held in the R. L. Vaughan Center. The following students will be commissioned:

&quotWe have 23 contracted cadets, and the battalion has tripled in size. We are producing outstanding officers for the U. S. Army,&quot Barnes said. &quotTheir grade point averages and their scores at the Leadership Development Assessment Course, their physical fitness scores, community service and extracurricular activity scores determine where cadets are assigned for duty after graduation. We are confident that they are prepared to serve the country well.&quot Barnes said.

Brigadier General Gorham holds a Bachelor of Arts in History from Greenville, NC and a Master of Science from US Army War College, Strategic Studies.&ampnbsp Some of his major awards and decorations include the Meritorious Service Medal Army Commendation Medal (with 2 Bronze Oak Leaf Clusters) Army Achievement Medal Iraq Campaign Medal Global War on Terrorism Service Medal and the Humanitarian Service Medal.

He is married to the former Barbara Battle and they have two children Jamie and Joshua.