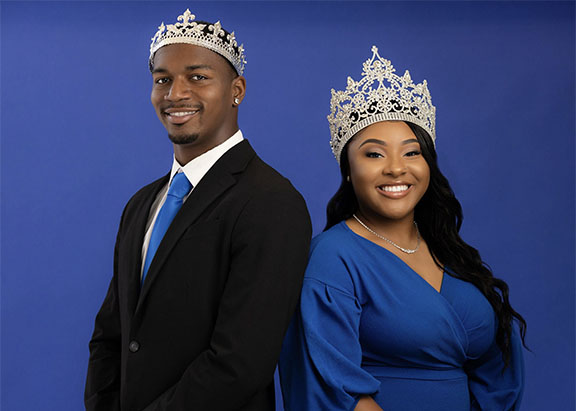 The crowns have been placed and now Diamond Rawlinson and Joshua Cox are officially the 2021-2022 Ms. and Mr. ECSU. The Elizabeth City State University royal coronation ceremony was held at the K.E. White Center Sunday, Oct. 17, officially launching Homecoming 2021-Reunited.

Diamond Rawlinson is pursuing a degree in early childhood education with an eye on becoming a school teacher and eventually attending law school. She says she had never considered taking on a student leadership position until she came to ECSU.

“I knew I wanted to be involved and make a difference in people’s lives,” she said.

She was first crowned Miss Freshman after realizing it was a good way to represent ECSU. She would eventually be crowned Miss Sophomore because she realized she “could do anything I set my mind to.”

Her platform when running for Ms. ECSU was F.E.A.R., or Face Everything And Rise.

“I want to show others it is possible to become what you have dreamed of,” said Ms. ECSU, “despite what you’ve been through because you will rise.”

Her goals as Ms. ECSU are to represent the university and student body to the best of her ability, and to expand student leadership by promoting leadership and getting more students involved on campus.

“They will become more informed, inspired, insightful and in doing so, we now have a path to expand student leadership through bridging the gap and breeding leaders for tomorrow,” she said.

Ms. ECSU says she would also like to empower university women by hosting self-care and self-love events, women empowerment seminars, and more.

“Most important is community service,” said Ms. ECSU. “The greatest gift you can give is your time. As your queen, I will make myself available by hosting diverse community service opportunities. I want to make sure everyone gets a fair chance to participate and give back to the community.

Ms. ECSU says that being a Viking has “been an experience like no other.” Being a Viking, she says, inspires her to be great because of the campus culture.

“I’ve been blessed to be around so many creative, smart, and innovative individuals at one time,” she said. “My HBCU experience has been priceless and I wouldn’t trade it for the world.”

A biology major with a concentration in education, Joshua Cox says being Mr. ECSU is a chance to “interact with all students and be there for them.”

“I feel as if my platform, ‘Push It,’ gave me the idea to push the community on and off campus to have them involved,” said Mr. ECSU.

As Mr. ECSU, he says the aim is to get together with other young men and support them. He says that he understands struggle and if it’s an issue, he wants to be there for them.

“I would say that my experience here showed me nothing but love when I got here,” he said. “It’s very family oriented.”

Mr. ECSU says that his favorite thing about being a Viking is to show Viking Pride!, at the games and support the teams. And chicken Wednesdays in the café, listening to music with friends and just enjoying himself are highlights on any given day or week.

He says becoming a Viking is the best decision he “has ever made,” and would encourage future students to do the same.

“They have made me feel at home and it has become my home because whenever I needed help, or someone to talk to, like faculty or staff, somebody has always been there,” said Mr. ECSU.

Mr. ECSU will commission into the U.S. Army as a second lieutenant upon graduation. After that, he plans to pursue graduate degrees, working as a physician’s assistant and then eventually a pediatrician. 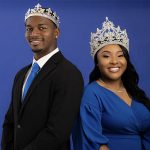