0
584 Views
Warning: json_decode() expects parameter 1 to be string, object given in /srv/users/serverpilot/apps/ecsunewsroom/public/wp-content/plugins/posts-social-shares-count/classes/share.count.php on line 66
0
Shares 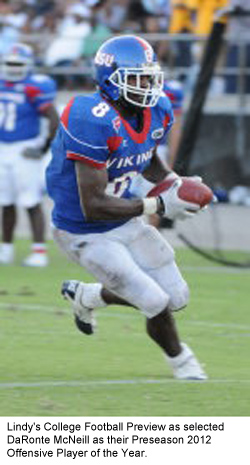 With college football season just around the corner, the Elizabeth City State University Vikings have begun to generate some buzz with the release of the 2012 Lindy’s Sports College Football Preview. Seniors Brad Davis and DaRonte McNeill earned individual nods on Lindy’s All-Division II preseason teams Davis a defensive lineman and All-CIAA First team honoree in 2011 has been named to the All-Division II Defensive Second Team. Last season he tied for first on the team with 11 sacks for a loss of 74 yards. All-American DaRonte McNeill should be on this year’s Harlon Hill watch list after a breakout 2011 season that ended with him owning 14 ECSU records including that of the school’s all-time leading rusher. Lindy’s has marked him as one of the top four players to watch in Division II in 2012 as their pick for Preseason Offensive Player of the Year. A native of Elizabeth City, McNeill was named the 2011 CIAA Offensive Player of the Year and also owns two CIAA records for yards in a single game (290) and carries in a season (354). After a 2011 campaign that saw the Vikings earn an NCAA Playoff Berth and finish the season at 8-4 overall, Lindy’s Sports has ranked ECSU at preseason #18 in their top 25. Defending CIAA champion Winston-Salem State University, who lost in the NCAA Division II Semifinals, landed at #7 in the Lindy’s preseason ranking. The magazine, which features Virginia Tech quarterback Logan Thomas on the cover, will be on display until September 10th. The Vikings will kick off the season on September 1 at Newberry College in Newberry, SC. For more information on ECSU Athletics, visit www.ecsuvikings.com and follow on Twitter @ECSUVikings. April J. Emory Elizabeth City State University Sports Information Director