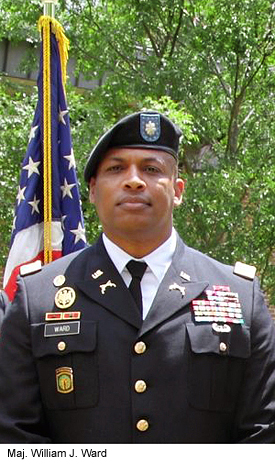 From small town monuments to national memorial sites, Americans paused to observe Memorial Day and to honor veterans who died in service to the country. Each sacrificed life painted another bold stripe in the flag of freedom. According to Maj. William J. Ward, our freedom should never be discounted.

Ward spoke at the Chowan County Memorial Day ceremony, which was held at the Chowan County Veterans Memorial in Edenton. Memorial Day was a time of personal reflection for Ward, a Bronze Star recipient who also was awarded a Meritorious Service Medal. Ward is an assistant professor and recruiting officer with the Military Science Department at Elizabeth City State University. Although it’s been 26 years since he enlisted with the Army, he can easily recall the valiant soldiers he met early in his career. He spotlighted two during his talk.

He spoke of 1st Sgt. Leonard A. Funk Jr., who served in WWII. Funk was awarded the Medal of Honor for gallantry on Jan. 29, 1945, when he captured and killed 21 German soldiers who had been holding American soldiers hostage near Holzheim, Belgium.&ampnbsp

&quotI met him when I was a young paratrooper and he was 65 or more years of age, telling stories with his peers over a few beers. His story was amazing — definitely an act of courage,&quot Ward recalled.

&quotYet, there he sat like a normal guy reflecting on an event that earned him the highest medal of valor you can earn,&quot Ward said. &quotAs a young guy, I realized how special it was to meet an award recipient who had been recognized by President Truman.&quot

Ward told the crowd of another courageous soldier, Master Sgt. Roy P. Benavidez, a Vietnam veteran who also received the Medal of Honor for heroism. Benavidez leaped into a helicopter to help a 12-man, Special Forces team that was surrounded by a battalion of North Vietnamese Army Regulars. Benavidez’s actions helped save the lives of eight men.

Ward has shelved the stories for 26 years.

&quotThose guys’ stories deserve to be told and we should know what they sacrificed for this country,&quot he said. &quotIn those guys, I saw the seven values of leadership that the Army looks for in leaders — loyalty, dedication to duty, responsibility, selfless service, honor, integrity and personal courage.&quot

Ward urged the Edenton audience to reserve time to listen when veterans describe some of the most horrific accounts of their lives. Their sacrifices were made to preserve the freedom we enjoy each day. Storytelling for vets, Ward said, is a means of coping and a means of educating the public.

Some veterans are concerned that people typically view Memorial Day as the start of summer festivities. Ward and other veterans are encouraged when Americans post flags, visit cemeteries and honor veterans in numerous other special ways.

&quotThank a veteran today for their service. They were courageous. They did not run away when placed in stressful and dangerous situations,&quot Ward said. &quotThe brave ones were the ones who stood up and did the right thing.&quot