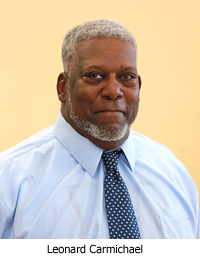 Leonard Carmichael, a guard for the 1968-1969 championship Vikings basketball team, is elated about his induction into the 2013 Class of the CIAA McLendon Hall of Fame. He is one of six individuals and one team slated for the March 1st induction in Charlotte, N.C. The induction ceremony caps Carmichael’s journey to the South that began when he was a 20-year-old Army veteran from Trenton, N.J. A friend, Marvin Trotman from nearby Princeton, N.J., encouraged Carmichael to enroll at what was then Elizabeth City State Teacher’s College. Trotman liked the university so much that he assured Carmichael he, too, could achieve there. Carmichael was reluctant but considered the suggestion. After a persuasive conversation with his dad, Lennon Carmichael, the young Leonard decided to enroll. His father, who worked two jobs to support the family, never had graduated from high school but realized the value of education. He dropped off Leonard at the school, advising him to make the most of the opportunity. He told Leonard he was welcome to return home each summer to work, but only if he passed his courses. If not, he said, Leonard would have to return to the military. Carmichael earned the best of grades his freshman year and was eager to share the good news with his parents. He also joined an outstanding team of athletes with whom he enjoyed playing and traveling. The coach, Robert L. Vaughan, and the university’s professors clearly explained what was expected of student athletes – regular class attendance and their best performance. In those days of segregation, black college teams stayed on the campus of their competitors rather than at hotels. Carmichael said it allowed players to form friendships with the young men they would later face on the basketball court. Carmichael recalls the CIAA, at the time, was comprised of 18 teams. Talent was plentiful. Keen competition was assured. The loud cheering of students and supporters from the community nearly raised the gym roof. When the Vikings clinched the 1969 CIAA championship, they marked achievements, secured awards and earned a higher level of respect from peers who played for larger institutions. The team finished the season with a record of 29 wins and four losses. Best of all, the Vikings had bragging rights that lasted for decades. The next Viking teams to win the CIAA title in basketball were in 1981, and again in 2007. Carmichael, an avid fan, said they were long but celebrated victories. ECSU athletes, however, had won championships in other sports, such as football and wrestling. As a student athlete, Carmichael also began a 25-year career in the National Guard. He and his wife, George Ann, married when he was a junior. After graduating, he worked as an educator and coach for three years in Florida and 29 years in New Jersey. While Carmichael and his wife raised two sons and a daughter in New Jersey, he always dreamed of returning to North Carolina for retirement. His wife, a North Carolina native, supported his vision. Carmichael returned to ECSU to coach cross-country track in 2011 and will begin coaching track in 2013. Yet, Carmichael declares that 2011 was the worst year of his life. He had a heart attack in February of that year, a stroke later in May, and lost his caring mother in October. Today, he maintains a regular schedule of physical therapy. He is careful to eat healthy foods and follow the advice of his health care providers. He is determined to prevent the 55 pounds he recently lost from returning to his frame. He chuckles when he recalls weighing 175 to 180 pounds as a student athlete. Carmichael is grateful that the stroke didn’t impact his memory. He can recall numerous stories from those years on the basketball team. He takes pride in the number of times his dad faithfully drove from New Jersey to attend his basketball games and to see his brother’s football games. He learned lessons at ECSU that set the course for a busy life. &quotAs a student athlete, I learned time management skills. I learned the value of being on a team. It was the team’s success. I learned public speaking skills,&quot Carmichael said. &quotWhen I arrived, as a student, I knew I had to buckle down, study on Friday before I did anything else. When I made straight As my freshman year, I felt really good about coming to Elizabeth City. The professors were great and didn’t take excuses,&quot he said. &quotI’m looking forward to seeing so many people in Charlotte on March 1-family, friends, teammates, coaches, alumni and guys I played against. People have called to congratulate me and I really, really appreciate all the support.&quot Carmichael joins his coach, Robert L Vaughan, and fellow alumni and friends Marvin Trotman and Michael Gale, his college roommate and teammate, in the CIAA John McLendon Hall of Fame.