Leary and Bartlett 2016 Employees of the Year

0
562 Views
Warning: json_decode() expects parameter 1 to be string, object given in /srv/users/serverpilot/apps/ecsunewsroom/public/wp-content/plugins/posts-social-shares-count/classes/share.count.php on line 66
0
Shares 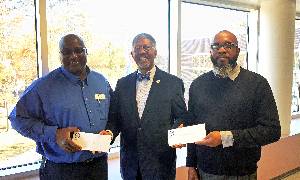 Bartlett and Leary were nominated for the honor which included submittal of their paper for State-wide awards.

Leary and Bartlett 2016 Employees of the Year