0
429 Views
Warning: json_decode() expects parameter 1 to be string, object given in /srv/users/serverpilot/apps/ecsunewsroom/public/wp-content/plugins/posts-social-shares-count/classes/share.count.php on line 66
0
Shares 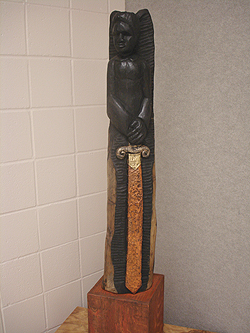 Bonnie Winston
December 07, 2009 Alexis Joyner is ever mindful of the power of the image.A sculptor and chairman of the Art Department at Elizabeth City State University, Joyner has produced hundreds of pieces – mostly in wood – during his more than 30-year career as a professional artist. Ranging in height from 1 1/2 to 7 feet, his works are dramatic and inspiring.&quotI call them little visual sermonettes,&quot he said, &quotbecause each has a different message.&quotThose messages – of hope, perseverance and overcoming great obstacles – speak not only to the African-American experience, but to universal themes that touch all of humanity.&quotFrom the Rain,&quot the signature piece in a current exhibition of Joyner’s sculpture at the African American Atelier in Greensboro, N.C., features a matriarch holding an umbrella that she has closed.&quotNot to be corny, but you know that expression, ‘Into every life rain must fall,’ well, she has put her umbrella down symbolizing that she has coped with these issues,&quot Joyner explained.The piece contains extraordinary detail in both its sculpting and its meaning. This hallmark makes his works highly sought for regional, national and international exhibitions. Joyner’s work is in private collections and several galleries across the country, including the New York Public Library’s noted Schomburg Center for Research in Black Culture in New York City. Three of his metal works adorn Elizabeth City State University’s campus, including &quotAnanse,&quot a work that stands 14 feet and symbolizes creativity and the spider trickster from West African folktales.Nearly 40 of Joyner’s sculptures are featured in the Greensboro exhibition. It is only the second exhibition of three-dimensional art in the African American Atelier’s 19-year history, according to exhibit organizers. The African American Atelier, Inc., a non-profit art organization, seeks to promote an awareness, appreciation and sensitivity to the visual arts and culture of African Americans. The organization also works in harmony with other ethnic groups. &quotAlexis Joyner’s work is strong, bold and truly profound,&quot said Dr. Alma S. Adams, co-founder of the Greensboro gallery, an art professor at Bennett College and a member of the North Carolina legislature.Dr. Adams, who curated the exhibit, initially saw Joyner’s work in a catalog of a group exhibition held in Greenville, N.C.&quotI was really drawn to his work,&quot she said. &quotThere is so much symbolism there. It speaks to community. It speaks to heritage.&quotMany of the pieces in the show depict women with strong hands, legs and feet, she said. &quotThey are powerful people with a strong presence. They have the theme of holding our community together.&quotWhen you see it, it makes connections to our families, to our history,&quot Dr. Adams continued. &quotThey remind me of people I know and people I had around me while I was growing up.&quotHundreds of schoolchildren, college students and adults who have seen the exhibit have responded very positively to Joyner’s work, Dr. Adams noted. Youngsters in storytelling and sketching programs have sat around the three-dimension works, studying each piece from all sides.&quotIt sends a message of authenticity,&quot she said, &quotand makes them understand better what artists do and their significance. It’s very inspiring.&quotMuch of Joyner’s work is inspired by his travels to Ghana and Nigeria and his memories of his childhood growing up in Capron, a small town in Southampton County, Va. His parents were sharecroppers with little more than a sixth-grade education, he said. &quotBut they were two of the most brilliant people I’ve ever known,&quot said the 54-year-old Joyner.His mother was a talented seamstress, who made tuxedos, wedding dresses and other fine clothing. &quotSomeone could give her a picture in a catalog and she could make a garment that looked like it came from Saks Fifth Avenue,&quot he said.His parents, he said, encouraged him to do his best even when they learned he was majoring in art at Virginia State University. He went on to earn a master of fine arts degree in sculpture in 1984 from Old Dominion University.Even as he taught art in the public schools in Isle of Wight County, Va., for 10 years beginning in 1979, Joyner was sculpting pieces mostly from hardwoods native to the region. He said he inherited from his parents a strong work ethic that has him in his backyard art studio even now into the wee hours working to bring his latest vision to life.He has taught art at Elizabeth City State University since 1989. His goal, he said, is to inspire budding young artists. He understands that it can be difficult to make a living as an artist.&quotI try to be real with them,&quot Joyner said. &quotI know that first and foremost you have to be totally committed to make a go of it in art. It’s like music – you have to practice, practice, practice.&quotHe said he also tries to impart to his students the responsibility that comes with being an artist, chiefly the power of the image and using art for positive ends.&quotWe always want the next generation to be better,&quot Joyner said. &quotAnd while there are many things we try to forget, we must teach our history. I try, through my art, to gently tap our children on the shoulder and say, ‘This is important.’&quotProfessor Joyner’s sculptures will be on exhibit at the African American Atelier in Greensboro through Dec. 18. For more information, go to www.africanamericanatelier.org