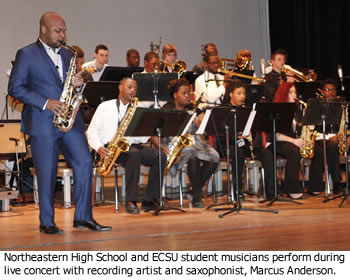 It’s not every day that local student musicians can witness and participate with nationally acclaimed musicians. Last week’s two-day Jazz Festival at ECSU was indeed a rare event for Northeastern High School and Elizabeth City State University students. On April 14, the United States Navy Commodores Jazz Ensemble, the Navy’s premier jazz band, brought the best of big band jazz music to Elizabeth City. Their talent has led them to perform for public concerts and jazz festivals across the country. The musicians write and arrange much of the music performed on stage. Best of all, their performances are free of charge. On April 15, the audience paid a modest fee to hear saxophonist Marcus Anderson lead those high school and college students through a stunning night of jazz and R &amp B music. Anderson tours with Prince now but has opened concerts for a wide range of pop artists and recorded his own music. Earlier in the afternoon, Anderson held a clinic for the students. Douglas Jackson, a professor in the ECSU Department of Visual and Performing Arts, said those are crucial experiences that students need to excel as future musicians. &quotOur clinic was the educational component of the festival, just as the festival is an extension of my classroom. I always ask our guests to present a clinic because this gives them and our students an opportunity to interact,&quot Jackson said. &quotThis year the focus of the festival was the saxophone. Marcus demonstrated the instrument, took the instruments apart and explained the kinesiology associated with playing the saxophone. He did the same with his flute and his electronic instrument. &quot As an instructor, Jackson was particularly fond of a unique demonstration by Anderson who played the same notes over two different styles of music as evidence of how the elements of musical work together. During the festival, Anderson transitioned from jazz to pop and R &amp B music that soared on music charts in the 70s, 80s and 90s. Much of that music still easily lures an audience on radio stations and internet sites today. &quotAs an educator it is important for me to reflect on those pop and R&ampB favorites by Stevie Wonder and Earth Wind and Fire, so students realize how one style of music influences the next. That music was an antecedent to today’s hip-hop and neo-soul music,&quot Jackson said. &quotStudents need to witness the flawless execution of live, experienced musicians. They need to have opportunities to ask questions and see repeated demonstrations of musical techniques. Then, their education is instantly extended from the classroom,&quot Jackson said. &quotWe want more area parents to make sure student musicians come here and take advantage of these free clinics. Customarily, we extend the invitations to all regional music teachers.&quot Wayne James, the band instructor at Northeastern High School (NHS) and a skillful trumpeter agrees the jazz festival sessions are valuable experiences for area youth musicians. He recommends music instruction for youths because it enhances self-discipline. Nine NHS current students and two graduates performed with the ECSU Jazz Ensemble. &quotMy students were thoroughly impressed with Mr. Anderson who inspired and encouraged them to practice even more. They learned some different practice techniques and how to interpret the sound of jazz,&quot James said. Best of all, James said, the jazz festival was a success because it brought &quota lot of people together&quot to enjoy outstanding musicians. The two-day Jazz Festival was sponsored by Centurylink.