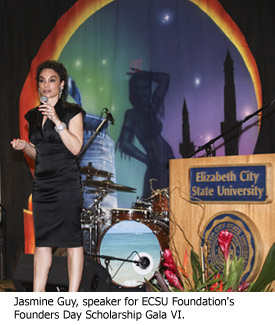 Organizers of the ECSU Foundation’s Founders Day Scholarship Gala VI succeeded in drawing a diverse crowd to campus on March 9 to greet Actress Jasmine Guy. Early in the afternoon Guy emphasized the importance of early planning for college to area youths. She was the guest speaker, for a community event, &quotA Different World: Planning Today for Your Tomorrow,&quot that targeted middle and high school students. The event drew approximately 250 youths to the Robert L. Vaughan Center for a series of workshops and her presentation. Although it has been over 20 years since Guy portrayed the unforgettable southern belle, Whitley Gilbert, on NBC’s TV sitcom, &quotA Different World&quot she is still widely recognized for the role. The show’s archive editions remain a family favorite that are still broadcast on several stations. Guy’s talent and determination also led her positions as a professional dancer, director, a writer and an actress on several other TV shows and movies. Currently, she works as a motivational speaker and a speaker to bring awareness to child sex trafficking with the &quotI am Not Yours!&quot Campaign Later, she spoke for the audience who attended the sixth, black tie scholarship gala that is the university’s premier fundraiser. ECSU Vice Chancellor for Institutional Advancement William Smith said he is confident the audience was happy they were on hand to welcome her to Elizabeth City. She helped attract approximately 350 attendees to the annual event. Smith said the university remains grateful for those who donated money to the fundraiser and as well as those who purchased tickets and attended. Financial support from donors remains critical to the success of students, 122 years after the institution first opened its doors.