When Ja’Naye “JayCee” Ruffin stood before a crowd of Elizabeth City State University students inside the Ridley Student Center in August, she commanded their attention. Within minutes of the 2014 ECSU graduate’s introduction, students were on the edge of their seats, listening as she talked about her story, personal responsibility, and being an effective person in today’s world.

“You don’t have stay in the same mentality of where you are from; it’s all about what you believe,” Ruffin said in an interview from her home in Washington D.C. “As long as you believe and surround yourself with positive people, you can achieve whatever you want. However, before you do that you have to know who you are.”

That is the core of Ruffin’s message to ECSU students, that you can achieve your dreams, but first get to know who you are.

Ruffin owns a marketing company, 7th Shot, which focuses, she says, on promoting positive images and also marketing her own work, including a recently published book, “Reality Sold Separately.”

The book tells the story of her journey as a university student, and as a student athlete. It is, she says, a story of challenges, yet they are challenges that shaped the woman she is today. It includes 50 motivational quotes from a variety of sources.

Her talk to ECSU students, titled “EviroMENTAL,” encouraged the students to take note of an acronym she created for her book, P.A.S.E. That stands for Practical, Action, Social, and Emotional.

“It teaches you to how to know yourself,” she said. “You are all four of those, but whichever one you think you are first, that gives you an understanding of how your day is going to go.”

Ruffin says she sees herself as, “a big action person.” Her day, she says, is about taking action and, “operating on positivity.”

Although Ruffin earned a degree in sports medicine, with a concentration in marketing and communications, she says her career path is in the entertainment industry. Her friend and fellow ECSU graduate Brandon “DJ B-Owtt” Cobb is credited with getting her out in front of an audience as a DJ, prompting her to set a major life goal.

“I want to have a number one rated talk show,” she said.

Her first venture into the entertainment industry will be a web-based TV show titled, “Up Next! With Jaycee.” It is a talk show which features music and music videos, and Ruffin says she is launching the project from Washington D.C., but hopes to get it picked up in Los Angeles. She’s working on getting the right exposure for the show, and for herself.

“I will be in attendance this year for the Revolt Music Conference in Miami,” she said. “It’s the number one black music conference for entrepreneurs and motivational speakers, and people who are trying to break out, in the industry.”

Regardless of where Ruffin’s path leads her, though, she always plans to keep her eye on motivating people, and being, she says, a leader amongst her generation.

“Keep God first and as long as you believe, you can do whatever you want,” she says. 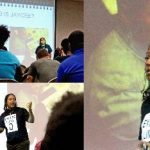