0
541 Views
Warning: json_decode() expects parameter 1 to be string, object given in /srv/users/serverpilot/apps/ecsunewsroom/public/wp-content/plugins/posts-social-shares-count/classes/share.count.php on line 66
0
Shares 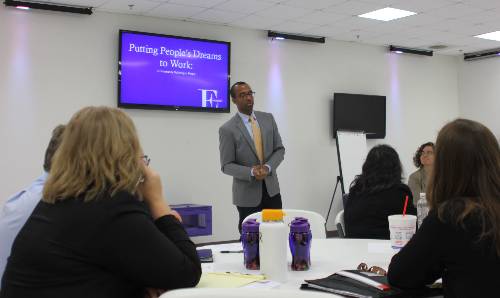 Bringing people together to chart a course toward the future is what Elizabeth City State University’s InnovatEC is all about. Two months after its inaugural meeting, Elizabeth City State University hosted its second meeting with community civic and business leaders and area residents, facilitated by members of NC Growth, a UNC-Chapel Hill organization whose mission is to help communities establish sustainable economic futures.

Gathering at The Mount in Elizabeth City Monday, Aug. 22, 2016, more than 30 participants gathered to discuss what they believe are the needs of the region. InnovatEC co-chair, Cathy Davidson of the Albemarle Commission, said what is needed most right now is not only strong insight into the needs of the region, but also “a diverse group of individuals” to help guide the region toward change.

The idea behind InnovatEC is to seek ways to facilitate the dreams of future entrepreneurs. By facilitating those needs, the region can work together toward a sustainable economic future. According to InnovatEC co-chair, Special Assistant to the Chancellor Russ Haddad, the idea is to implement a process that will allow future entrepreneurs to guide the initiative.

The people of the region will help determine the course this initiative takes. Everyone is welcome to participate.

NC Growth representatives Meredith Brunnell, Carolyn Fryberger, and Mark Little facilitated discussions at three separate tables. Each group was asked to list needs, concerns and hopes for the region. The items tallied at the tables will then be assessed and returned to the next meeting for further discussion.

Haddad says he hopes more and more people will be brought into the InnovatEC process. Part of the success of such an initiative is bringing a diverse representation of the community into the discussions, he emphasized. Input from those people could result in the type of action needed to spur interest in entrepreneurship and ultimately growth in the region.

According to ECSU Chancellor Thomas Conway, this is not a singular effort on the part of ECSU. Rather, the university is serving as a catalyst, providing the platform for such an initiative to grow.

Chancellor Conway observed that an initiative such as InnovatEC can help identify the needs and desires of existing businesses and offer guidance in growing from those industries. Industries such as aviation and agriculture are just two examples.

While the discussion surrounding the needs of the region is ongoing, Haddad says what is needed are more participants. From business owners to individuals interested in a future as entrepreneurs, Haddad hopes the list of participants will grow.

For more information about InnovatEC, contact Haddad at 252-335-3373 or email him at rghaddad@ecsu.edu.