Howard represents students on Board of Trustees 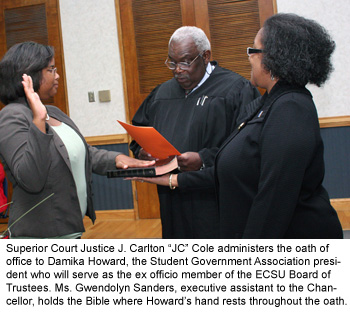 Damika Howard, a junior from Virginia Beach, Va., was sworn into office September 14 as the ex-officio member the ECSU Board of Trustees. The membership of the Board of Trustees is composed eight members elected by the Board of Governors four&ampnbsp appointed by the Governor and the president of the ECSU Student Government who serves as ex officio. Superior Court Justice J. Carlton &quotJC&quot Cole administered the oath of office to the new board member.

During the September 14 meeting, Howard presented four initiatives from the Student Government Association. They included the Sagging Pants Policy, the Campus Safety Policy, the Solar Panel Marquee Board which will relay student activities and her platform: Together Everyone Achieves More.

Howard represents students on Board of Trustees