0
218 Views
Warning: json_decode() expects parameter 1 to be string, object given in /srv/users/serverpilot/apps/ecsunewsroom/public/wp-content/plugins/posts-social-shares-count/classes/share.count.php on line 66
0
Shares 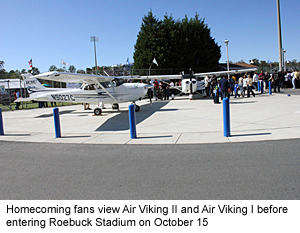 ECSU fans celebrated more than the Homecoming victory last Saturday. Many took their first glimpse of the university’s new 172 SP model Cessna. The Aviation Science program parked Air Viking II and Air Viking I, right outside Roebuck Stadium for alumni and supporters to view. A Chesapeake native and student pilot, Corey Kellam, and his instructor Dr. Anthony Sharp flew the new plane back to the area from Kansas where it was purchased earlier in October. Another student, Phillip Dodson from South Mills, N.C. and his instructor Dwayne&ampnbspMorison flew the one-year-old Air Viking I back to the area from Kansas. They showed them off to trustees and administrators on October 10 but couldn’t wait to show it off to Homecoming fans. Both planes will be used for flight instruction. ECSU is the only university in the UNC system that offers a B. S. degree in Aviation Science.

Kellam, a 21-year-old senior from&ampnbsp Chesapeake, Va., who is majoring in Aviation science said the flight back from Wichita, Kansas lasted a total of 13 hours flown over two days . The journey gave him some much needed flight hours as a pilot and experience as a pilot entering and exiting major airports along their route.

&quotIt was an amazing trip going in and out of airports in Indiana, Dayton, Ohio, Richmond, Va., and on to Edenton. Of course we enjoyed brining the plane in from Edenton Monday (October 10)&ampnbsp to meet everybody at the airport in Elizabeth City for their first view of Air Viking II.&quot

While in Kansas, the students toured the site where the Cessna planes are manufactured. Dodson said the manufacturing plant gave them a good view of the many people involved in assembling the airplanes.

&quotWe saw an assembly line for Cessnas in Kansas, planes like those two we flew. We also saw them make models for individuals and a model that is used as a business jet,&quot Dodson said.&ampnbsp &quotThey have different stations where sections of the plane are made, a section where they add the electronics, the cockpit Garmin.&ampnbsp Later they move them to a hangar where they sandblast them, paint them, work on the interior and run the planes a series of thorough engine tests.&quot