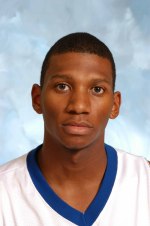 CHARLOTTE, NC-For the second time this season Pre-Season All-CIAA selection Anthony Hilliard scored a career high, netting 31 points to go along with 11 rebounds to help lead the Elizabeth City State University Vikings past Johnson C. Smith University 78-70 Tuesday night at Brayboy Gymnasium. The two teams faced off last season on February 9th in Elizabeth City, the Golden Bulls defeated the Vikings in overtime on an ESPNU nationally televised game. Tonight ECSU exacted their revenge, placing four Viking in double figures to earn their first win of the season. Joining Hilliard was senior, forward C.J. Pigford who finished with 16 points while Anthony Butler and Devin Mooring contributed 11 points apiece. The Vikings out-rebounded the Golden Bulls 43-36, leading to 20 second chance points for ECSU. The game saw one tie in the first couple of minutes of play but after a lay-up by Anthony Hilliard at the 16:15 mark on the first half gave ECSU a 7-5 lead, the Vikings would not relinquish the lead. ECSU chimed in with a 14-point advantage (42-28) after the third consecutive three-pointer by Devin Mooring with 3:17 left in the first half. The Golden Bulls did manage to trim the lead to 45-37 by the intermission. In the second half the Golden Bulls would get within four points on five different occasions, the final coming with just 44 seconds remaining. ECSU finally put the game away via two free throws by Mooring with 38 ticks left and after a missed three-pointer by Terry Givens, Hilliard’s floating lay-up with 18 seconds left gave the Vikings the 8-point victory. Maurice Hooper and Terry Givens led JCSU (2-3, CIAA 0-1) with 20 and 10 points, respectively. The Vikings (1-3, CIAA 1-0) will return to action on Thursday, November 30th at Livingstone College in Salisbury, NC. Game time is slated for 7:30pm. For more information on ECSU Athletics, visit www.ecsuvikings.com .