David Hanson’s wall contains a collection of awards he earned in the Navy but a space on that wall is reserved for his new bachelor’s degree. As soon as the degree is framed it will reflect an accomplishment he’s proud to have achieved.

“This was probably a day my parents weren’t sure they would see since I went into the Navy in 1984 right after high school. Back then I wasn’t academically inclined” Hanson said. “The military gave me the focus and discipline so I could achieve what I did at ECSU.”

“They really kept me here. During those first weeks of my freshman year I was almost kicking and screaming with doubt” he joked. “When I showed up wearing a business suit at the first ceremony the university holds for freshman some people in the lobby mistook me for a parent of a student or one of the professors. I laughed and told them ‘no I am not a professor here just the world’s oldest freshman.’ ”

Hanson overcame his apprehension for walking the campus with students half his age. He developed good study habits and found the faculty and staff to be very attentive. He was especially complimentary of the criminal justice faculty and the staff at the G. R. Little Library where he spent many hours preparing for class assignments.

“From the time they opened that door at 7 in the morning the library staff was smiling and always willing to help me search for whatever I needed” Hanson said.

“Being an older student I realized what was at stake. It inspired me and I studied a lot longer than I might have at the age of 18. I worked for an insurance agency in the past so I’d seen how people with a college degree moved up faster.”

Last spring Hanson was one three students to win the Chancellor’s Distinguished Emblem award an award reserved for students who have earned seniors who maintain a minimum 3.75 grade point average for six consecutive semesters and they must have completed all their courses at ECSU. One of those three became Bearer of the Mace for the spring 2014 commencement. Hanson then realized he could be a contender for the Bearer of the Mace recognition if he maintained a superior grade point average this semester his last semester. His successfully reached that goal when his grade point average ranked higher than other contenders. Now he is ready to encourage other adults who are contemplating a return to college.

“Don’t think it’s been too long because it’s never too late. Thanks to the post 911 GI Bill I was able to devote my time to going to school full time I’m really glad.” 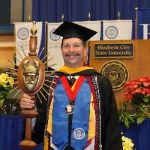