0
565 Views
Warning: json_decode() expects parameter 1 to be string, object given in /srv/users/serverpilot/apps/ecsunewsroom/public/wp-content/plugins/posts-social-shares-count/classes/share.count.php on line 66
0
Shares 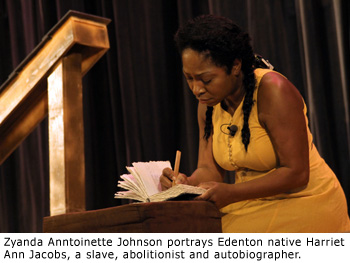 On February 8, Zyanda Anntoinette Johnson captivated her audience in the Mickey L. Burnim Fine Arts Center with her portrayal of North Carolina native Harriet Ann Jacobs. Jacobs’ autobiography, &quotIncidents in the life of a Slave Girl&quot (1861) was the source of a historical drama, &quotThe Fragrance of Freedom, &quotwhich Johnson wrote and performs. The drama reflects on the cruelty of slavery, the lack of control slaves had over their bodies, their families and the lack of fair labor standards. For years, Jacob lived in seclusion (her grandmother’s attic) to avoid her abusive slave owner and a system (slavery) that tore the families and the nation apart. &quotIncidents in the life of a Slave Girl&quot is a highly recommend female antebellum slave narrative for students at Elizabeth City State University. Dr. Hilary Green, an assistant professor in the Department of History and Political Science, recommends the book for students enrolled in her class, History 250, African American History to 1877. &quotI am often struck by how many students have not heard of this Edenton native. There is a marker in Edenton to indicate Jacobs was a native. I share with students a map of Edenton and from it I can show students where Jacobs’ home stood, her grandmother’s home and all the major places she wrote about in the book, &quotIncidents in the life of a Slave Girl,&quot Green said. &quotThe book is a personal favorite. Her gripping narrative enables me to reveal the local contributions to the larger study of African American history. In celebration of the 200th anniversary of Harriet Jacobs’ birth, my colleague, Professor Tonya Blair, and I felt that this performance would be a fitting tribute.&quot After escaping, Jacobs found work in the north as a nursemaid. She became an abolitionist who helped other slaves escape. She and her daughter, Louisa, helped Black refugees and eventually helped establish schools and nursing homes. Johnson told her audience it is her pleasure to perform this drama fueled by a mother’s love for her children and a woman’s courageous pursuit of freedom. Her performance is one of many free events slated at ECSU for Black History Month. Johnson is an actress, director, playwright and storyteller. She has appeared in theatre productions of Jar the Floor, The Colored Museum, Joe Turner’s Come and Gone, From the Mississippi Delta, A Raisin’ in the Sun, For Colored Girls… and the Dr. Martin Luther King Jr. Papers Project for Stanford University. She recently completed writing her first play &quotThe Fragrance of Freedom,&quot a 90-minute solo performance piece on the life of feminist and slave Harriet Ann Jacobs. Johnson has presented this historical drama at several colleges and university since the fall of 2012.