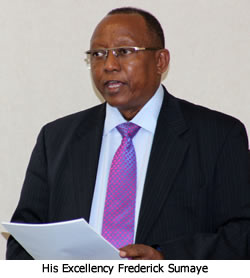 ECSU’s Global Leadership Academy recently welcomed His Excellency Frederick Sumaye, former prime minister of the United Republic of Tanzania, as the guest speaker for the Chancellor’s Distinguished Lecture Series. His Excellency Sumaye served as a member of Parliament from October 1985 until December 2005. His Excellency also served as Deputy Minister and Minister, consecutively, of Agriculture, Livestock and Cooperatives. He served as the Prime Minister of the United Republic of Tanzania from November 1995 to December 2005, during which time he acted as the principal advisor to the President and led the implementation of policies and programs within all ministry, regional, and governmental agencies. His Excellency also chaired various committees, including the National Investment Steering Committee, Fast Track Privatization Committee, and the Disaster Management Committee. Following his time as Prime Minister, His Excellency served as a Goodwill Ambassador for the United Nations Industrial Development Organization (UNIDO) from 2005 to 2006. Sumaye, earned his diploma from Egerton University in Kenya, and a MPA from Harvard University. Sumaye told an audience of ECSU faculty, staff and students he was honored to visit the university and give a first-hand account of Tanzania, a product of the 1964 union of two independent states, Tanganyika and Zanzibar. Before 1995 the country was under a one party system of democracy but afterwards moved to a multi-party democracy. &quotThe country has enjoyed slightly sustain economic growth. The GDP (gross domestic product) has been improving over time, averaging 6 percent since 2000. The main drivers of growth are telecommunications, transport and financial intermediation, manufacturing, construction and trade. Exports are also growing as well as the natural gas discovery, which is already contribution to the growth while services sector also expanded moderately,&quot Sumaye said. &quotThe oil and gas and the mining sectors are expected to play an important role in extractive industry and in socio-economic transformation of the country at large in the near future. However some loopholes in Tanzania mining contracts actually deny a nation a lot of fiscal gains. The majority of the people do not get spillover effects in terms of employment creation, increased income and other aspects of human development. &quotAgriculture is the backbone of the economy in Tanzania as in most African countries. Its contribution (economy) has been declining in recent years. One of the very serious challenges is lack of reliable and affordable electricity. When President Obama came to Tanzania, he announced the &quotAfrica Power,&quot initiative of additional 10,000 megawatts of additional electricity generation to Africa. We were delighted by that announcement because we know for sure it will have a substantial positive impact on our economies and wellbeing of our people.&quot Sumaye’s visit is part of a series of speeches that occur thanks to partnership between ECSU and the African Presidential Archives and Research Center at Boston University. It has allowed ECSU students, staff and faculty a rare opportunity to hear speeches by elected officials who represented African democratic societies.