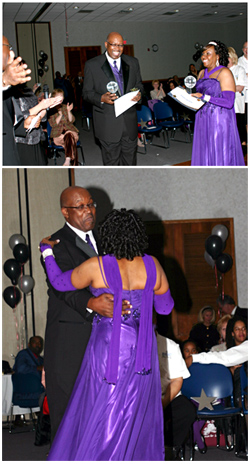 It was a night of dazzling dance moves and fancy footwork at the K. E. White Graduate Center, but ECSU Chancellor Willie Gilchrist and his wife Jacqueline were the brightest stars under the sky. They also led the teams of contestants in dollars raised for the Albemarle Area United Way’s fundraiser, &quotDancing Under the Stars.&quot The event was held on February 26, 2011.

The Gilchrists led the contestants in dollars raised. Albemarle Area United Way raised over $7,000 that will be used support 24 charities across the Albemarle. Susan Hoskins, executive director the Albemarle Area United Way said the event was a fun way for area residents to participate in fundraising. Organizers made great attempts to operate an event that the audience and participants would recognize as modeled by the famous TV show, &quotDancing With the Stars.&quot

&quotWe were looking to do a signature event that hasn’t been done in this area that was fun. We needed something different from the usual auction and golf tournament,&quot Hoskins said. &quotIt will take the spot of our golf tournament that we used to have in the spring.&ampnbsp This fundraiser will help 24 partner agencies that Albemarle Area United Way supports in the nine counties.&quot

Hoskins also said she was grateful for the help of their &quotcelebrity judges,&quot Dr. Denauvo Robinson of Smart Start Stephanie Harrell of Catholic Charities and Pat Youngblood of Albemarle Hopeline.