0
254 Views
Warning: json_decode() expects parameter 1 to be string, object given in /srv/users/serverpilot/apps/ecsunewsroom/public/wp-content/plugins/posts-social-shares-count/classes/share.count.php on line 66
0
Shares 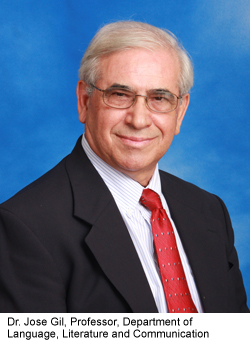 Kesha Williams
February 28, 2011 Dr. Jose’ S. Gil, a professor in the Department of Language, Literature and Communication, is a recipient of the 2011 Board of Governors Award for Excellence in Teaching. The award for Gil and 16 other outstanding faculty at the UNC institutions includes an engraved bronze medallion and a stipend check for $7,500. The award represents the University’s highest honor for superior teaching.Gil, a seasoned administrator and educator, joined Elizabeth City State University in July 2000 as the Dean of the newly founded School of Arts and Humanities and also as Professor of Languages.&ampnbsp He organized a new school, worked assiduously to create new programs and update existing ones and attain laboratory materials, studios, Smart classrooms and acquire appropriated technology for classrooms and laboratories.&ampnbsp He also began the self-study processes to acquire specialized accreditations for SACS and NCATE and other specialized accreditations and certifications.Gil teaches Spanish, World Literature for the Language Literature and Communications Department. He has been involved in several research projects involving culture and the&ampnbsp civilization of Hispanic peoples. &quotI am happy because to me it gives teachers incentive to transferring knowledge to students. Teaching is continuous learning. We want them to have the capacity to learn for the rest of their lives. You lead them out to different places , to different heights. This is good recognition for educators.&ampnbsp Congratulations to the other recipients of this award,&quot Gil said.A nationally and internationally recognized scholar,&ampnbsp Gil has been published in numerous international, peer-reviewed journals and books in Spain, Belgium, Italy, the United States and Australia.&ampnbsp He was chosen as the keynote speaker for the inauguration of the European Center of the Three Cultures (Christian, Muslim, and Jewish) in Toledo, Spain.&ampnbsp He has also given scholarly presentations worldwide and is a regular speaker at various venues in the Albemarle region of North Carolina.Because of his renown as a linguist,&ampnbsp Gil was asked to participate in an international language and linguistics project at Marburg University in Germany.&ampnbsp Gil contributed phonological, syntactical and morphological information to Marburg’s worldwide database.&ampnbsp This information is vital for linguists-in-training who wish to add to their knowledge about the sounds and structures of international languages.&ampnbsp For the past several years, he has also served with Wycliffe Associates, a division of Wycliffe Bible Translators, and has assisted with several translation and language development projects.&ampnbsp These include the Bisu project in Chiangmai, Thiland the Ayta project on Luzon in the Philippines the Bhoghoto, Mypemo, and Banda Linda projects in the Central African Republic and a digitization project for the Memba language in Zambia.&ampnbsp In addition to being a Fulbright Scholar and Kellog Fellow, Dr. Gil has received other awards and recognitions.&ampnbsp He was selected and awarded the Continental Who’s Who Among Executives and Professionals.&ampnbsp He served on the Red Cross Board for six years that honored him several times for his distinguished service.&ampnbsp He currently translates for Hispanic services for Holy Family Church in Elizabeth City.&ampnbsp He serves on numerous committees at Elizabeth City State University, the University of North Carolina system, and in the community, including the Albemarle Arts Council and the Elizabeth City Morning Rotary Club.&ampnbspJose S. Gil currently serves as Professor of Languages and Literatures at Elizabeth City State University in the Department of Language, Literature, and Communication.&ampnbsp A native of Spain, Dr. Gil studied in different institutions in Madrid, Barcelona and Valencia.&ampnbsp He moved to Washington, DC, where he attained an MA and PhD at the Catholic University of America.&ampnbsp Dr. Gil also furthered his training for administration in higher education through a post-doctoral fellowship grant from the Kellog Foundation.&ampnbsp Later, he traveled to Brazil as a Fulbright Scholar.