0
528 Views
Warning: json_decode() expects parameter 1 to be string, object given in /srv/users/serverpilot/apps/ecsunewsroom/public/wp-content/plugins/posts-social-shares-count/classes/share.count.php on line 66
0
Shares 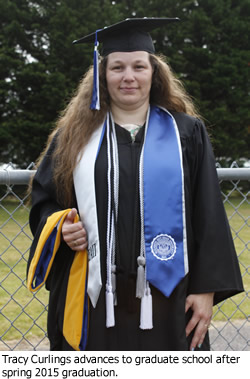 Ask Tracy Curlings if she has come a long way and she will quickly nod her head and say, &quotYes.&quot In the early 90’s, Curlings was a 16-year-old, high school dropout. Fast forward to spring 2015 and she graduated from Elizabeth City State University with a bachelor’s degree in geology. Now she is preparing for her first semester at North Carolina State University where she’ll begin a master’s degree program in Geospatial Informational Systems. Many things have taken place in Curlings’ life within this time frame. She became a single mother, earned a general education diploma (GED), and worked in assorted industries-commercial fishing, security, construction, nursing home assisting, and a position at Pettigrew State Park. Eventually, she decided she could not advance beyond entry-level jobs without additional education. After earning two associate degrees from College of the Albemarle, Curlings attended a 2012 Open House session at ECSU. She learned about the Virginia North Carolina Louis Stokes Alliances for Minority Participation (LSAMP) program, which exposes underrepresented minorities to careers in science, technology, engineering, and math (STEM). Curlings was interested in this program, but feared she would not fit in. She was much older than most of the 18-year-old college students who usually participate and she would need childcare. Yet, she knew she could benefit from the program. ECSU faculty and staff encouraged her to apply, focus on excelling and nothing else. She accepted that challenge and began a remarkable journey. &quotI took [LSAMP’s summer] classes and got to learn more about the [university]…,&quot Curlings said. &quotAt the close of the program I was awarded a certificate for being the most inquisitive in the program. I was always asking questions. I believe that is why I received it.&quot She enrolled as an ECSU freshman the following semester and took advantage of the university’s resources. Over the next three years, Curling became an honor roll student and a member of the National Society of Leadership and Success. There was one significant change, however, to her plan. &quotI went to ECSU for a four-year-degree in Marine Science and ended up changing my major,&quot Curling said. &quotI took Introduction to Geology as an elective (course). I loved it so much that I changed my major and never looked back.&quot Her advice to students who are considering whether they should return to school or transfer from a community college is simple. &quotWhere there is a will, there is a way!!&quot ECSU will hold orientation for transfer students on July 17 and August 15. Visit the Office of Transfer Advising and Resources webpage for more information on their services or call 252-335-3474.