Gaskins an ECSU alumnus inducted into CIAA’s hall of fame

0
441 Views
Warning: json_decode() expects parameter 1 to be string, object given in /srv/users/serverpilot/apps/ecsunewsroom/public/wp-content/plugins/posts-social-shares-count/classes/share.count.php on line 66
0
Shares

ECSU alumnus Arthur “Boo Boo” Gaskins was one of 10 honorees inducted into the 2015-16 John B. McLendon Jr. Hall of Fame during the 2016 CIAA basketball tournament. A formal induction ceremony was held at the 2016 Hall of Fame Breakfast on Friday February 26 at the Charlotte Convention Center. The inductees also greeted the crowd of fans on Friday evening during the tournament semi-final game.

Gaskins joined ECSU’s basketball team in 1977 and was a standout student-athlete throughout his collegiate career. After his freshman season performance he earned CIAA Rookie of the Year. In 1978 Gaskins averaged 26.1 points per game making him the leading scorer in the CIAA and among the top five in NCAA Division II. That season he headed the Vikings team in several single-game categories including points (46) field goals (23) and free throws (12). During the 1979-80 season the 6-foot-four-inch guard once again tallied team single-game highs including points (40) and free throws (9). Gaskins earned consecutive honors as CIAA Player of the Year in 1980 and in 1981 when the Vikings marked a 13-6 conference record. Gaskins a native of Windsor said he admired the skills of the athletes who preceded him as well as those who played basketball with him. He credits his teammates for helping him accomplish so much.

“I played against greatness everyday (in practice). Anybody on the team between the years of 1977-82 could really play so you weren’t afraid to face another team” Gaskins said. “Our coaches Kelly Mackey and Vaughan were serious about basketball but they were serious about education too. And we graduated.”

Gaskins who was raised by his grandmother said he was happy the coaches steadily recruited him and offered a four-year scholarship to the university. He was honored to be the only freshman joining a varsity team of seniors. When they graduated he tried to serve as a big brother to his teammates the following year. Some of them also attended the festivities last weekend in Charlotte but he was sorry one teammate Calvin Maddox died years ago and could not join them.

“God gave me a talent and I worked on it. I could drop those J’s (jump shots). We were so proud to win that ’81 basketball tournament. So when I stepped on that stage to accept the CIAA award I was proud to represent Elizabeth City.”

Gaskins a restaurant manager in Atlantic City New Jersey is still a fan of the game and advises young athletes to take seriously the opportunity to earn a college degree. Advancing to a professional sports team is not the only goal an athlete should set Gaskins said.

“When you are 17 there are so many obstacles that can distract you but you’ve got to be focused. You’ve got to be serious and dedicated to get the education your parents expect you to get” Gaskins said. “I loved the game but I went there to get an education.”

“It’s been 31 years since we won that tournament one of two that Elizabeth City won. I was nominated before so I was glad they chose me for this year’s Hall of Fame. I must say the CIAA was first class in everything they did for us (inductees). It was just awesome.”

He was inducted into ECSU’s Sports Hall of Fame in 1994. ECSU fans cheered as the CIAA Hall of Fame inductees were announced Friday night. The announcement of the inductees is just one more reason CIAA fans look forward to this tournament.

“The impact that this group of honorees has had on the community their respective institutions and alma maters and the CIAA as a whole is immeasurable” said Jacqie McWilliams CIAA Commissioner. 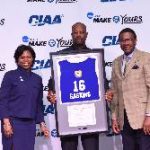 Gaskins an ECSU alumnus inducted into CIAA’s hall of fame