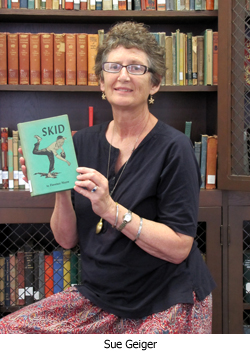 The staff of the G. R. Little Library continuously review the collection of books to determine their relative use for today’s patron. On a recent review, Sue Geiger, a reference librarian, decided to remove over 1,000 books from the stacks and establish a very special collection: the Vintage Children’s Literature Collection.

The books included were all published before 1940, some as early as 1890. They came from a children’s literature collection that is maintained to support the curriculum of the Education Department. Students majoring in education frequently use that collection to complete assignments. In their sometimes shabby condition, the vintage books were often overlooked in favor of the newer more colorful, shiny generations of children’s books.&ampnbsp Geiger realized the books were a treasure trove of history– the history of elementary education, of children’s literature, and of children’s art.&ampnbsp

&quotThe new collection has been established in order to protect them as part of the heritage of ECSU, and to keep them available to the university and the patrons of the library in perpetuity, Geiger said. &quotMany of these books have been here since this institution was a state normal school and contain that school’s seal inside. &ampnbspThis is a very special collection you won’t find in another library.&quot

&ampnbspIn the early years, the Elizabeth City State Normal School contained an elementary school within it where new teachers received training and could practice while local children received an education. Many of the original books in that school’s children’s literature collection may have been the same textbooks or storybooks that were being used in the classroom.&ampnbsp The collection was almost certainly used as part of the teachers’ training curriculum Geiger said.&ampnbsp

The State Normal School’s early collection contained many books useful for a classroom setting such as the 1927 edition of &quotYoung Peoples History of the World War&quot by Louis P. Benezet illustrated by numerous black and white photographs.&ampnbsp It also contained many biographies for example the &quotLives of Poor Boys Who Became Famous&quot by Sarah K. Bolton (1925), or &quotHeroines of Service&quot by Mary R. Parkman (1917). Geography was well represented with stories of people and places around the world, as were the arts, the sciences, and technology.&ampnbsp There are books of poetry, nursery rhymes, biographies, adventure stories, the classics along with books on morals, virtues, obedience, death, and faith.&ampnbsp The illustrations, in some cases, represent some of the first books that positively reflected the lives of black children and families.