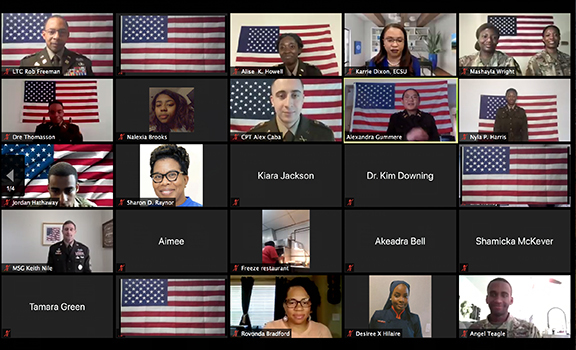 During a virtual ceremony on Friday, May 7, four Elizabeth City State University students were commissioned as officers into the United States Army.

“You have earned everything that comes with his moment,” said Lt. Col. Robert Freeman, professor of Military Science at ECSU. Brig. Gen. Ronald R. Regin was this semester’s keynote speaker.

The commissioned officers took their oaths virtually and received their second lieutenant bars from family members, all via a Zoom ceremony.

Second Lt. Thomasson is graduating from ECSU with a Bachelor of Arts in Sociology and is currently working towards a second degree in social work. He will attend the Basic Officer Leadership Course before joining the Army’s armor division and plans to prepare for Ranger School.

During his time as an undergraduate, 2ndLt. Thomasson served as Cadet Battalion Commander, and Executive Officer. He is also member of the Kappa Alpha Psi Fraternity, Inc., where he served as president, vice president and exchequer.

Second Lt. Thomasson is the son of Deneatrius Griffin and the grandson of Ola Mae Hopes. He has two brothers and one sister.

Second Lt. Howell is graduating from ECSU with a Bachelor of Science in Social Work degree. The Tarboro, North Carolina native will enter the Quartermaster Corps as an Army Reserve officer.

As an undergraduate, 2ndLt. Howell served as the Campus Activity Board Spirits and Traditions chair, became a member of the National Society of Leadership and Success, the Study Abroad Program, Paint the Town Blue and served as the Color Guard commander.

She is the daughter of Lakisha Burton and Samuel Howell. Second Lt. Howell has one brother and one sister.

Second Lt. Gummere is graduating from ECSU with a Bachelor of Science in Early Childhood Education Birth-Kindergarten and a minor in Military Science. After attending Basic Officer Leadership Course at Fort Sill, Oklahoma, she will join a field artillery unit.

She is the daughter of U.S. Marine Corp retired Chief Warrant Officer David Gummere and U.S. Navy retired Lt. Cmdr. Mary Gummere. She is the youngest of seven siblings.

Second Lt. Harris was raised in Camden, North Carolina and will graduate from ECSU with a Bachelor of Science in Biology with a minor in Military Science. She will also graduate with four years in the University Honors Program.

As an undergraduate, 2ndLt. Harris was a George C. Marshall Recipient, an honor awarded to the top ROTC cadet at each university. She served as the Viking Battalion Commander for the ROTC; was president of the Delta Theta Chapter of Alpha Kappa Alpha Sorority, Inc.; the team captain for the Honda All-Star Challenge Quiz Bowl Team, the women’s varsity bowling team, and cross-country team.

Second Lt. Harris is the daughter of Garry and Natalya Harris. She has one sister and two brothers. 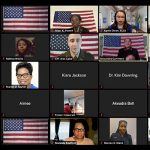