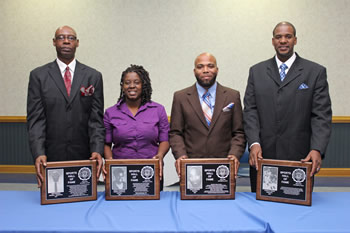 Four former ECSU athletes recently gathered at the Kermit E. White Graduate and Continuing Education Center to celebrate their induction into the Sports Hall of Fame. Fred Hargrove (’77) was a four-year letterman in men’s basketball and football. He was among the CIAA’s leading receivers during the 1977 season. Hargrove, a 1977 All-CIAA tight end and three-time CIAA Player of the Week in football was signed by the Philadelphia Eagles as a free agent in 1978. Aaron Murchison (’97), a four-year letterman and starter on the football team, is ECSU’s No. 2 all-time leading rusher. The running back was named CIAA Rookie of the Year in 1993 and was a co-captain during his senior season. Murchison also earned the 1993 ECSU Golden Helmet Award and was named to the All-CIAA Football First team in 1995 and 1996. Marcus Riddick (’00) lettered and started for four years in men’s basketball. He led the Vikings in scoring and in rebounding in 1999 and 2000. He was selected as team co-captain in 2000. Riddick was named to the All-CIAA Rookie Basketball Team in 1996 and to the All-CIAA Men’s Basketball Team in 1999 and 2000. Raquita Washington (’02) lettered and started for four years in women’s basketball. The 1998 CIAA Freshman Basketball Player of the Year was named to the 1999, 2000 and 2001 All-CIAA Women’s Basketball teams. Washington, who was a basketball co-captain during her senior season, also was a member of ECSU’s softball, volleyball and women’s cross country teams. The ECSU softball squad won the CIAA championship during Washington’s senior season.