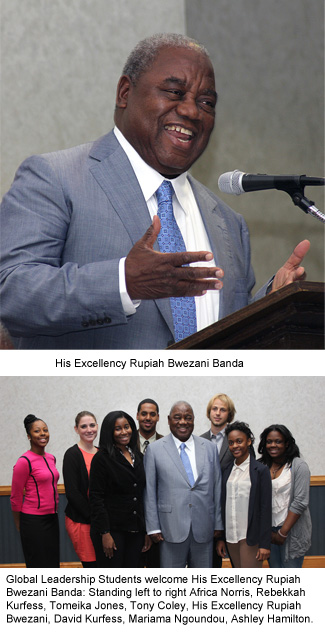 Banda, 75, was Zambia’s fourth president, entering office from the vice presidency in August 2008, after the untimely death of President Levy Mwanawasa. He stood for and was elected to the presidency in October 2008, and served until he lost a bid for re-election in September 2011 to Michael Sata.

Zambia, which covers, 467,375 square miles, has a population of about 13 million people and is home to a diverse 73 tribal groupings. Speaking at ECSU, Banda described his presidency as one dedicated to improving Zambia’s economy and ensuring security, stability and prosperity for all Zambians. He was proud of raising the nation’s gross domestic product by 7.6 percent, its highest, in 2010. His administration also was successful, he said, in improving health care and education, increasing agricultural production and increasing the number of jobs in Zambia.

His involvement in politics began when he was 17. Banda said he, like most young Zambians at the time, was drawn into politics to fight the colonialists, in this case the British. Zambians, he said, resented the discrimination against their people.

In his speech, he revealed lessons learned from his presidency and the years in government that preceded his election. He admitted being disappointed at losing the 2011 election that would have granted him a second term as president, but said he learned valuable lessons about democracy during the years.

&quotThere are many things of which I’m proud during my time as president of Zambia, one of which is the process of my ceding from office. The process by which you leave is as important as that by which you come in,&quot he said. &quotI’m proud that my administration left with dignity, affording my successor the opportunity to succeed or fail based on his policies, not because of political traps laid by those he followed. Let me add that I made the transition from power complete. On my own accord, I even relinquished the leadership position of my party. I did so because I believe past presidents must give future leadership an opportunity to emerge.

&quotFor democracy to flourish, there must be a continuing stream of individuals of integrity and ideas with promise. There must be room for a new generation of leaders to rise to solve the next generation of problems. If democracy is going to be secure in countries like Zambia, if development is going to take root, old leaders can’t cling to power or attempt to consolidate it at all costs. There comes a time when leaders must step aside and become statesmen — elder or not — and stop seeing themselves as the personification of the state.

&quotPolitical leaders have a responsibility to listen to their people, not their own egos. The people of Zambia have basic needs — to put food on the table, to have the opportunity to find work and to be granted the dignity to be able to select and hold accountable their political leaders,&quot he continued.

&quotThese goals cannot be met without a fair system and strong economic growth. And my government was faced with accomplishing this task in the face of the worst global economic recession in recent history.

&quotWhen my presidency began, we continued the fight against corruption and sought to base these anti-corruption efforts under a sound statutory framework that would conduct prosecutions in a lawful manner. . . Zambians are still struggling to have a popularly driven constitution to guarantee the people’s rights and to protect this fragile democracy from the abuses of its rulers.

&quotAs a relatively small nation on the global stage, Zambia remains dependent on foreign investment and relations with both trade partners and donor countries. While we didn’t work miracles with the economy, we did work wonders. Again, over 7 percent growth during a world-wide recession is pretty good by any measure. If President Obama had my numbers, I don’t think he’d be worried about re-election in November.&quot

Before departing the stage, Banda shared concerns about his native country, which he described as one of the most urbanized countries in Africa. The country, he said, has very young population and is struggling to provide meaningful employment to its citizens. The anger of young, unemployed, hungry citizens can destabilize any country, he said, leaving it open to radical ideas. He applauded the role of regional and internationally recognized &quotmature&quot democracies play in assisting fragile nations.

&quotFrom my experience as the president of Zambia, what I can tell you is that democracy and good governance is a never-ending job. It is not something that is accomplished and then just left to stand alone. It must always be strengthened, respected and upheld. Democracy also requires a culture of acceptance. The people of the country must understand that even when their candidate loses and the other candidate wins, it is still their government.&quot

Banda became Zambia’s first ambassador to Egypt in 1964. He remained in the post three years until he was named Zambia’s ambassador to the United States in 1967. In 1970, he was appointed general manager of the National Agricultural Marketing Board, the state crop marketing company. He subsequently became head of the Rural Development Corporation, the state agricultural holding company, one of the largest conglomerates of its time.

In 1974, Banda became the permanent representative of Zambia to the United Nations and served as foreign minister of Zambia in 1975. He also served as president of the U.N. Council on Namibia, which was effectively the government of Namibia while the matter of South Africa’s disputed mandate over the territory was resolved.

Outside politics, Banda has owned and operated electrical engineering services firms and served as vice president of the Football Association of Zambia.