0
627 Views
Warning: json_decode() expects parameter 1 to be string, object given in /srv/users/serverpilot/apps/ecsunewsroom/public/wp-content/plugins/posts-social-shares-count/classes/share.count.php on line 66
0
Shares 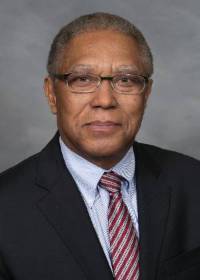 Attorney and North Carolina Senator, Daniel T. Blue Jr., will give the keynote address during the 2016 Elizabeth City State University commencement on Dec. 10, 2016, 10 a.m., at the R.L Vaughan Center on the campus of ECSU.

Blue was hired by one of North Carolina’s leading law firms, Sanford, Cannon, Adams &amp McCullough. He became one of the first African Americans to integrate the state’s major law firms. However, he would go on to establish his own firm, Blue, Stephens &amp Fellers, in Raleigh, where his two sons and daughter-in-law practice law alongside him.

In 1980, Blue was elected to the North Carolina House of Representatives, representing Wake County. He was re-elected 10 times and held a number of leadership positions in the House, including chairman of the Judiciary and Appropriations Committee. Blue was elected to serve as Speaker of the North Carolina House of Representatives twice, from 1991 to 1995.

Although Blue left the House after 22 years to run for the U.S. Senate in 2002, he returned in 2006 and now serves in the North Carolina Senate, representing Wake County.

Blue is recognized across North Carolina and the country for his political service. He is the immediate past chair of the Board of Trustees of Duke University. He is currently serving as a member of the Executive Committee of the Duke University Health System.

Blue resides in Raleigh with his wife, Edna, a civic and community leader.