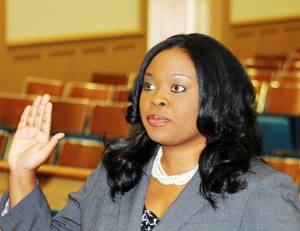 Standing before family and friends, 2013 Elizabeth City State University graduate Brittany Whidbee took an oath to uphold the laws of North Carolina and the United States and became an official member of the North Carolina Bar Association.

Inside the Pasquotank County Courthouse in Elizabeth City, on Thursday, October 20, 2016, ECSU graduate and District Judge, The Hon. Eula Reid, administered the new attorney’s oath as The Hon. J.C. Cole presided over a ceremony he praised as a great day for Whidbee, her family, and ECSU.

Whidbee is an Elizabeth City native, and a graduate of Northeastern High School. She came to ECSU in 2009 as a criminal justice major.

During her freshman year, Whidbee would become Miss Freshman 2009. It was an honor that would lead the very active and popular student to becoming the 2012-2013 Miss ECSU.

In 2013, Whidbee was crowned Miss CIAA during the annual March basketball tournament in Charlotte.

During her senior year, Whidbee would also be awarded the Chancellor’s Distinguished Emblem Award. The award is given to seniors who have maintained a 3.75 grade point average or higher for six consecutive semesters.

She is the daughter of Lionel and Venita Whidbee. Whidbee will be practicing law in Elizabeth City.