0
809 Views
Warning: json_decode() expects parameter 1 to be string, object given in /srv/users/serverpilot/apps/ecsunewsroom/public/wp-content/plugins/posts-social-shares-count/classes/share.count.php on line 66
0
Shares

Each year during the Founder’s Day Gala to be held Saturday March 11 at the K.E. White Center the Elizabeth City State University Foundation honors men and women who have shown outstanding service to ECSU. This year five people will be honored with the Chancellor’s Legacy Award.

Dr. Richard L. Lucas is the former vice chancellor for Intuitional Advancement at ECSU. He is credited with founding the Founder’s Day Gala.

Dr. Lucas is currently the vice president for institutional advancement at Bowie State University and the executive director of the BSU Foundation. He is a graduate of Cornell University’s Administrative Management Institute the Millennium Leadership Initiative and a member of the National Society for Distinguished Professionals the Council for Advancement and Support of Education the Association of Fundraising Processionals and Black Data Processing Associates.

Dr. Lucas holds an Ed.M. and Ph.D. in Education from the University at Buffalo and a B.S. in Information Systems Management from Buffalo State College.

Estella Hall Simons is one of the oldest living ECSU alums to date. She is a 1955 graduate of then Elizabeth City State Teachers College.

A native of Bertie County Mrs. Simons was born in 1917. She is the one of 11 siblings with a college degree.

Her plan was to go to college and was offered scholarships for Hampton Institute and Shaw University. But when the time came she decided to marry the love of her life Willie Simons.

With her husband’s encouragement Mrs. Simons would enroll at Elizabeth City State Teachers College in 1951. She would become an honor student and a member of the Alpha Kappa Mu Honor Society. In 1953 she would become one of the first members of the on-campus chapter of Delta Sigma Theta Sorority Incorporated.

After graduation she would begin teaching at C.G. White High School in Powellsville North Carolina until 1968. When schools integrated Mrs. Simons was transferred to the junior high school in Windsor where she would teach until her retirement in 1982.

She is a life member of the ECSU National Alumni Association Inc. and has served on the NAA board of directors and homecoming committee. She is the past president of the Bertie County Alumni Chapter and is currently the alumni chapter treasurer.

Dennis Leary is ECSU’s longtime director of facilities management. In his position he manages and directs building and grounds maintenance event and more. But it is Mr. Leary’s dedication work ethic positive attitude and imitable Viking Spirit that brings him praise from his peers.

Mr. Leary is a native of Chowan County. While working full time he earned certifications in heating and air conditioning services and fuel piping and he graduated from the Association of Physical Plant Administrators Institute for Facilities Management.

Dr. Glen Bowman is a professor of history at ECSU who has been on the faculty since 1999. In 2015 he published “Elizabeth City State University 1891-2016: The Continuity of a Historical Legacy of Excellence and Resilience.” All royalties from the book have gone to the ECSU Foundation.

In 2005 Dr. Bowman established the Leonard Ballou Memorial Fund supporting student travel scholarships and funding. The funds have come from the royalties from his book “The Razor’s Edge” a critical thinking text/world history reader.

Dr. Bowman also wrote a weekly column for The Daily Advance from March 2015 to December 2016 detailing historical facts about ECSU.

Dr. Bowman is a native of the Philadelphia area. He earned his Ph.D. in history from the University of Minnesota.

Billie Joe Reid is an Elizabeth City native and a 1970 graduate of ECSU. Mr. Reid was the first of nine siblings to graduate from college.

After graduating ECSU with a B.S. in Social Science Mr. Reid taught for one year at Plymouth High School in Plymouth North Carolina. He then returned to Elizabeth City where he taught in the Elizabeth City-Pasquotank County Public Schools from 1971 to 1976 while earning a Master’s Degree in Educational Administration from East Carolina University leading to a position as assistant principal at Northeastern High School for two years and principal at H.L. Trigg and Sheep Harney Elementary for five years each.

Mr. Reid became an agent with State Farm Insurance in 1988 and is an active civic member in the Elizabeth City area.

As a longtime advocate of ECSU Mr. Reid is a life member of the ECSU National Alumni Association Inc. and an active supporter of the Elizabeth City Area Alumni Chapter. He is also a member of the Kappa Alpha Psi Fraternity Incorporated.

In 1989 Mr. Reid was one of three African Americans to integrate The Pines former known as Pine Lakes Golfing and Country Club in Elizabeth City. 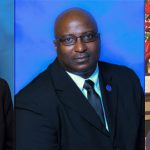