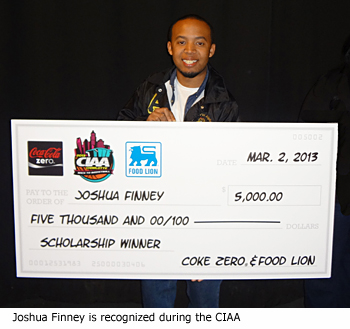 Senior Joshua Finney was selected as one of four Grand Prize winners of the 2013 CIAA / Food Lion / Coca-Cola Scholarship Contest. Students from CIAA schools competed in the essay contest which awarded four winners with a $5000 scholarship and 15 First Place Winners with a $1000 scholarship. Finney a Political Science major submitted an essay discussing why he chose to attend ECSU. Finney’s essay focused on the faculty whom he states &quottreated me like family first then a student&quot as well as the accommodations the school made to help with his diagnosis of Leukemia during his first two years at ECSU. Finney’s essay also highlighted the late Mr. Grady Deese who served as the former Director of Admissions and was highly influential in Finney’s decision to attend ECSU. Finney who plans to attend law school after graduating in May was honored by the recognition. This scholarship served as another blessing to what has already been a great beginning to 2013 for me. Winning was unexpected but I saw it as an opportunity to receive money for my education by simply writing an essay on why I chose to come to ECSU. By being a senior I had plenty of reasons to chose from. In addition to his scholarship Finney was also able to enjoy an all-expense-paid trip to Charlotte for the CIAA Tournament. Senior and SGA president DeVon McNair was also selected as one of the fifteen First Place Winners and will receive a $1000 scholarship. ### 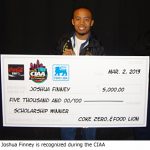